The Man Who Knew Everything: The Strange Life of Athanasius Kircher 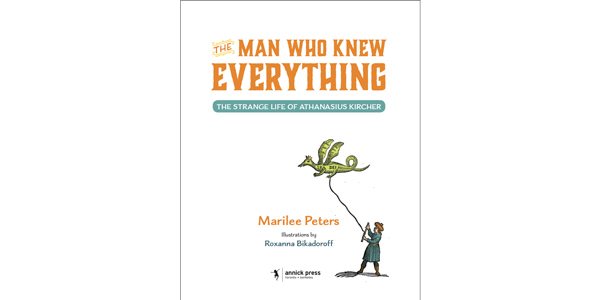 In the genre of children’s non-fiction about significant inventors, discoverers, pioneers, and scientists, the current trend lies in correcting the record and broadening the perception of history by highlighting figures who don’t fit the dead-white-male paradigm. That is necessary and important work.

At the same time, there are still a few DWMs worthy of attention. Like Athanasius Kircher, the subject of the new book by Marilee Peters and illustrator Roxanna Bikadoroff. Kircher, who was born in 1602 in a small village in what is now Germany, was the kind of kid who wanted to know how everything worked. He later became a Jesuit priest, and in his early 30s relocated to Rome, where he began a career as a proto-scientist – albeit one who mixed intense curiosity and intelligence with a showman’s knack for getting attention.

Peters’s account of Kircher’s life and work skips back and forth between straight biography and brief accounts of the things he studied, researched, and wrote about. He was literally a Renaissance man, who threw himself into everything: biology, medicine, physics, Egyptology, languages, theology, and more. That his conclusions were very often way off the mark – he thought wearing a dead toad could protect you from the plague – is less important than the fact that he was trying to figure out how things worked. He got a lot right, too: for example, that germs cause diseases, and that the Earth is held together by some kind of magnetic force.

Peters clearly has enormous enthusiasm for Kircher, and presents him both as a worthy predecessor to Newton, Edison, Curie, and Einstein, and a shameless huckster. The celebrated museum Kircher built in Rome contained many genuine artifacts and instruments, but also things like a talking statue and a bone from a race of giant humans. The account of Kircher being lowered into a semi-active volcano is the highlight of the book.

Bikadoroff brings a fitting visual approach to such an eccentric subject, mashing 17th-century imagery with her own cartoon drawings. In her depiction, as in Peters’s words, Kircher is tireless and charming, whether rushing up the side of a volcano in his Jesuit robes or communing with dragons and celestial beings.