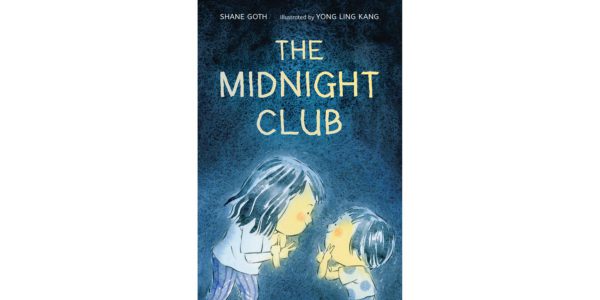 The Midnight Club follows sisters Becca and Milly as they roam their family home late at night while their parents sleep. Led by Oliver, the family cat, the Midnight Club has its own hand signals and rituals, which the reader learns alongside Milly as Becca, the older sister, leads her downstairs to sneak through the shadows, eat jellybeans, and explore the house together.

This is Shane Goth’s first picture book, and his prose is supported beautifully by Yong Ling Kang’s playful illustrations. Kang’s muted colour palette evokes the hushed feeling of being the only ones awake at night. The bursts of yellow against the otherwise blue-toned watercolour illustrations call attention to Milly and Becca as they creep through the sleepy backdrop – a deft use of contrast that emphasizes the interplay of shadow and light.

As Milly and Becca begin the rituals of the Midnight Club – not touching any shadows in the hallway, avoiding the squeaking stairs, sitting on chairs that are off limits during the day – Goth’s writing invites the reader to join them on their journey through the house. Although there are some moments of peril – Will their parents wake up? Who is scratching at the back door? – in general, The Midnight Club is a quiet book, with some missed opportunities to build anticipation. Potential conflicts are generally resolved as soon as they arise, and Goth focuses on the relationship between the sisters more than the question of whether they’ll get caught.

The Midnight Club is a lovingly illustrated bedtime story that will suit readers who want a gentle story about sibling bonding – one which, although it might inspire some midnight adventures, does include Milly and Becca getting too tired to continue playing downstairs. The final illustration of the book, an image of a scarf and hat on a chair at the kitchen table, will leave readers wondering, Just how secret is the Midnight Club?