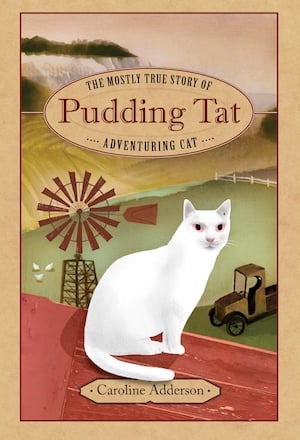 In her latest middle-grade novel, Caroline Adderson blends the right mix of history and fiction while crafting a story of cooperation, resilience, and bravery. Pudding Tat, named for the special dessert Farmer Willoughby brought to his Wellington County barn cats on Christmas Day, is a concern for his mother. White as snow with eyes as pink as his tongue, Pudding is not adept at catching mice or steering clear of danger. When Mother Tat pushes all her kittens – except Pudding – to leave their barn home, the titular hero literally gets a flea in his ear that encourages him to set off as well.

With each successive chapter, the relationship between Pudding and his flea develops from one of parasitism to one of mutualism. Their first adventure together occurs in 1901 when they join Annie Edson Taylor for a barrel ride over Niagara Falls. Next, Pudding and flea travel to the site of the Pan-American Exposition in Buffalo. En route, they witness the discrimination levelled against African American railway porters and indentured child street musicians.

They are present when President McKinley is shot and when Vincent Bryan and Gus Edwards compose “In My Merry Oldsmobile” – a tribute to Gus’s new car. In 1910, they’re on-board as Walter Wellman and his crew attempt their first cross-Atlantic airship flight. Pudding and flea even survive the 1912 sinking of the Titanic.

While they experience long periods of confinement and hunger, there are moments of opulence, filled with comfort and food. Because Pudding relies so much on his hearing, he’s often guided by music, which lures him into new circumstances – sometimes fortuitous, sometimes perilous. In the end, the adventurers make their way home, having defied all expectations.

Pudding Tat is a modest and heartfelt, albeit accidental, hero – a feline Forrest Gump.