The Octopus Has Three Hearts 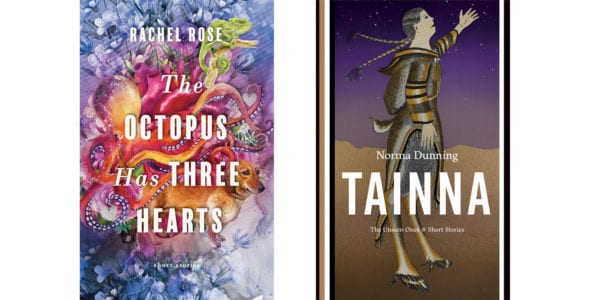 As readers, we are accustomed to thematic collections of short fiction, everything from Christmas stories to detective stories featuring cats to stories inspired by a Rush album. These collections, though, are generally multi-author anthologies. In single-author collections, themes tend to be less overt, more closely related to the individual writer’s concerns (or obsessions). The Octopus Has Three Hearts, the impressive short-fiction debut from Vancouver poet and memoirist Rachel Rose, is the rare single-author collection predicated on a thematic premise: animals in close contact with humans have an impact on the outcome of each story.

In isolation, the individual stories are very strong. Rose has a keen eye for the outsider, reflected in pieces like “Troll,” which has at its centre Troy Marino, a convicted sex offender who lives in a violent community of similar offenders under a Florida bridge. After witnessing a fellow resident’s suicide on a nearby highway, Marino takes charge of the man’s dog, a golden retriever mix named Roxy. While the dog doesn’t change his life, exactly – Rose wisely avoids that sort of sentimentality – the action of caring for another being does shift something within Marino, and the story leads to a deeper understanding, a confession, and a brush with Buddhist meditation.

In “Warhol,” a couple’s decision to look after an African grey parrot while its owners vacation in Mexico results not only in an insight into the other couple’s life but a shocking revelation from which their own relationship might not recover. The story’s inquiry into family, gender, fidelity, and the nature of love hinges on the parrot’s skill at mimicry, the sort of twist one might expect from a sitcom but which Rose uses to powerful effect.

Taken together, however, the collection’s emphasis on its characters’ relationships with animals becomes somewhat wearing. While the stories are individually strong, in combination they begin to feel like the results of a writing prompt, or a grudging requirement of the book’s conceit.

The harrowing “Jericho,” for example, is a powerful account of a young mother in a polyamorous relationship with two men who loses her young son at a music festival. The symbolic value of Yin and Yang, the two kittens she is forced to carry with her, is apparent, but the presence of the animals feels largely unnecessary. The story is otherwise stunning, but the animal focus of the book will have readers seeking significance in the wrong direction. Readers would be well advised to avoid immersing themselves in this collection, instead reading each story in isolation, allowing it to stand on its own merits.

This is not the case for Tainna, the new collection of stories from Edmonton writer and scholar Norma Dunning, whose previous collection, Annie Muktuk and Other Stories, won the Danuta Gleed Literary Award. Tainna means “the unseen ones” (which serves as the book’s subtitle), and the book is made up of six new stories “centred on modern-day Inuk experiences.” While the theme for Tainna is looser than that of The Octopus Has Three Hearts, the result is a more naturally cohesive collection, a powerful reading experience at the levels of both the volume as a whole and each individual entry.

These stories are characterized by a sense of journeying between, and bridging, multiple worlds: north and south, rural and urban, living and dead. Dunning demonstrates considerable confidence in both her readers and her own skills, rarely slowing to explain, allowing the narrative to reveal connections and truths as it progresses.

In “Kunak,” for example, the title character has drifted south following the death of his beloved Grandpa Chevy, working in Fort McMurray until “it all dried up.” On the streets after two years of unemployment, Kunak spends his days panhandling, drifting in memories of his past, unaware that his Grandpa Chevy is still with him, still watching over him.

In “Tainna (The Unseen Ones),” Billy Townsend, a retired soldier now working as a groundskeeper at a golf course, discovers the body of a young woman, surrounded by a group of Canada geese, “sitting in a circle with their necks pointing outwards. Sitting like bison do when protecting their young against aggressors.” As Townsend becomes determined to discover the truth about the young woman (despite police disinterest), readers follow the victim’s story, both in memory and in her journey with Kivalgo and Riita, two of the “old ones” guiding her to “one of the lands” following her death. The story is harrowing and heartbreaking, with an emotional denouement that is as surprising as it is inevitable.

The stories in Tainna are connected by the threads of cultural memory, loss, displacement, racism, and a rich sense of humour. “Eskimo Heaven,” which follows a white preacher on a spiritual journey with a roaming spirit, is especially funny – until it isn’t. While reading the stories individually is a significant experience, the true potency of the collection is cumulative. Tainna is less a collection of stories than it is the parts of a world, fragile and broken but powerful and dazzling all the same.