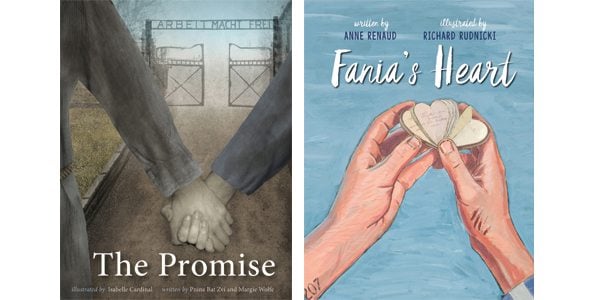 The Promise, co-written by cousins Pnina Bat Zvi and Margie Wolfe, begins with the image – rendered, like all the book’s illustrations, in Isabelle Cardinal’s compellingly strange, photo-realistic collage style – of sisters Rachel and Toby (Zvi’s and Wolfe’s real-life mothers, respectively) languishing in their shared barracks in Auschwitz. By day, the sisters perform meaningless hard labour, building and tearing down heavy stone walls alongside other inmates. At night, they dream of freedom and happier times.

When Rachel falls ill, Toby is alarmed: she knows the Nazis keep only those strong enough to work, a fact confirmed by the recent disappearance of their friend Lola. Her worst fears are soon confirmed: when Toby returns from her work one day, Rachel has vanished from her bed.

Believing her sister to be in a nearby barracks, she approaches its guard – described as “a prisoner who hoped to survive by helping the Nazis” – but her appeals are met with dismissal, even contempt. Desperate, Toby offers the guard her most valuable possession: the three gold coins, hidden in a tin of shoe paste, that were given to her by her parents before the Nazis took them away two years previously.

Though the first proffered coin clearly has an effect on the guard (her eyes, we’re told, shift “slightly”), she remains unmoved. It will ultimately take the sequential offering of all three coins before Toby is allowed inside the barracks. (Though based on a true story, The Promise neatly conforms to the famous rule of three, familiar from countless fairy tales.) There, Toby finds Rachel and brings her back to their own quarters to recover. When this transgression is discovered the next day, Toby receives lashes from a Nazi guard – though the latter’s announcement, “I’ve done my job,” and the fact she allows Rachel to stay suggest an oblique glimmer of sympathy.

Subtle, complex notions related to power, complicity, and allegiance are this book’s strength as well as its weakness. It might be a tad sophisticated for those at the younger end of the seven-to-10 age group at which it’s aimed. Zvi and Wolfe offer no explanation of what the Holocaust is (there’s a personal epilogue but no afterword), which means The Promise is a book best read, at least initially, with an adult who’s up for some deep discussions about history and the darker aspects of human nature.

Based on the story of a real Polish camp survivor, Fania Landau Fainer, Anne Renaud’s Fania’s Heart is a simple story, movingly told. It begins with a nine-year-old girl’s discovery of a card her mother received for her 20th birthday from fellow prisoners at a German munitions factory outside Auschwitz, which occasions a discussion about the object’s provenance and the Holocaust itself.

The card – a heart-shaped, embroidered book that unfolds like an origami flower – was painstakingly constructed by the women using precious fabric from their blouses, stolen materials, and glue made from bread and water. After being inscribed with a birthday wish from each woman in her native language, it was hidden inside a “cake” made of bread crumbs from their starvation-level rations. (The book, we learn, is one of only a few surviving objects created by prisoners at Auschwitz. It is currently housed in the Montreal Holocaust Museum.) The power of this otherwise simple, everyday gesture is that it required life-threatening sacrifice.

Renaud’s book does an admirable job providing the historical context lacking in The Promise; it would make an excellent companion to the latter as well as a worthy introduction to the subject of the Holocaust as a whole.