★The Quiet in Me 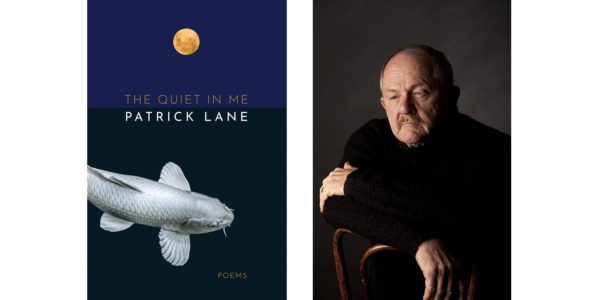 Editing Patrick Lane’s final book of poetry must have been difficult for his wife, poet Lorna Crozier, but as she says in the introduction, “I turned the editing into a conversation, the final dialogue about poetry we would have, his voice in the poems stretching across the months of his absence.” Lovers of poetry will be grateful for Crozier’s work in assembling this ever-so-rich volume of poems that Lane wrote in the midst of his final illness.

Subjects familiar in Lane’s writing flow throughout the collection, with his passion for nature found in almost every poem. In “The Breath,” an exquisite three-line poem, Lane observes a spider whose web “will cover the whole world.” Lane’s genius lies in his ability to make visible what most people don’t notice. He positions human beings alongside other creatures. In “Lacrimae,” Lane imagines being in the womb: “What wonder it was to swim inside her, / hear her drum song beating. In that womb was / another kind of calling, the one eelgrass knows / in the narrows where herring lay their eggs.” Everything is connected, and the failure of human beings to understand that means tragedy.

Many of the poems refer to sound, whether to its presence or its absence, and silence has its own sound. “Salvation” begins “Listen to the prayers the leaves make / before they fall.” Silence creates the space to hear so much else. Other poems refer to music. In “Chuck Berry and Cherry Blossoms,” the speaker, looking at a Japanese woodblock print in a museum, learns that no one there can read the script on the art. The words are lost even as the speaker hears Berry’s lyrics: “Each hidden word is a fragile blossom, begging / why can’t you be true, Chuck Berry’s notes / drifting among the low boughs of the cherry trees.” Lane excels at using the concrete to open pathways into contemplation.

Several poems deal explicitly with birth and death. The longest poem, “A Christmas Poem,” is a single gorgeous sentence just over two pages in length, and a highlight for the way it captures so many of Lane’s interests. He wonders about writing a Christmas poem and almost immediately starts with the animals, “the soft smell / of cattle in winter … and chickens, / surely there’d be chickens, roosting, / quiet” and then slides into a story about a young man attending the birth of a baby whose parents couldn’t afford a doctor. He thinks about that other birth, the one in the stable, and he sees in the young mother he has helped “the quiet in her after such a birth.” The whole scene is so muted and yet so alive; even though it’s not about that other birth, it is about the miracle of birth. The measured rush of the sentence as it spools through the lines demonstrates the relentless pull of thought – and life.

The title poem, “The Quiet in Me,” also blends two scenes, one of the speaker lifting a man back into his wheelchair and the other of him lifting a dead man onto a bed: “The body newly dead / falls, limber as tired rubber, heavy as the world.” The poem ends with the knowledge that such lifting and holding comes to us all: “the lovers too I laid to rest / in the sleep that follows love, all the arms I’ve held, such arms as will hold me.”

Fans of Patrick Lane’s poetry – and there are many – have a special treat in store with this slim volume. It has superb imagery. It encompasses the natural and human-made world. It has love. It is filled with graceful knowledge and elegant wisdom.