The Rule of Stephens 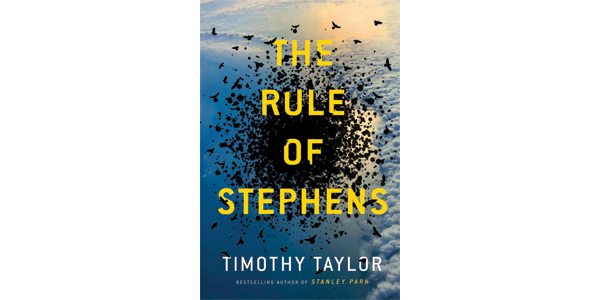 Despite the notable presence of anxiety-suppressing and sleep meds (from A to Z: Ativan, Klonopin, Paxipam, Valium, Xanax, Zopiclone), along with 499 souls killed in a jet crash and another handful of suicides, The Rule of Stephens is rousing and often intriguing fun.

In his third novel, Timothy Taylor opts for a setting very much in the here and now, featuring cutting-edge medical technology, a business start-up, venture capitalists, angel investors, and several references to the iPhone X. He also proves himself adroit at handling the twisty pacing of a paranoid corporate thriller.

Former street-outreach physician Catherine Bach has decided to risk it all by launching a company to market a revolutionary ingestible technology that will enable individual clients to monitor their own vital organs. Well before her product’s beta testing stages, Catherine’s overseas flight explodes at an altitude of 28,000 feet. One of only six survivors, she miraculously walks away with barely a scratch.

When she returns to work, the neophyte CEO is a kind of celebrity, though she finds herself haunted by some Gothic elements flowing out of the crash itself, which challenge her previously unshakeable faith in “materialist principles.” (Taylor’s teasing title pits the scientific worldview of Stephen Hawking against the “paranormal aberrations manifest in the work of Stephen King.”)

As Catherine begins to doubt her capabilities, squabble with her team, and disdain her deep-pocketed business partner, she’s contacted by another crash survivor. In the manner of Michael Redhill’s recent Scotiabank Giller Prize winner, Bellevue Square, the man is fixated on the presence of doppelgängers – in this case, a particular sort of double known as ion dubh. Celtic in origin, the ion dubh is “spawned at the moment of tragedy when one friend lives and another friend dies.” Naturally, Catherine initially regards the man’s ramblings as “absolutely mad.”

Per the conventions of the thriller genre, Taylor stations pragmatic mysteries at the forefront of his story. Who is a double agent? Who can be trusted? What’s really going on? And who will ultimately triumph? Taylor handles these formulaic technicalities with aplomb, but also seems to balk at the notion of writing a story that is merely an amalgam of Robin Cook and Michael Crichton. As Catherine’s paranoia mounts, her business falters, and she faces numerous perils and pitfalls (entrepreneurial, psychological, cosmological).

Through all this, Taylor slows the pace to explore, concisely but richly, philosophical ideas related to the known, the unknown, and the limits of one’s possible knowledge. Despite being armed with handy rationalizations about hallucinations and delusional misidentification syndrome, the perplexing circumstances that plague Catherine keep pushing her to consider inexplicable forces at work.

Unlike Redhill’s protagonist, Catherine can’t really commit to the paranormal. She might be willing to consider that there are more things in heaven and on earth than in her materialist philosophy, but she (and Taylor) would still rather stick with the pragmatic business at hand: salvaging her company, outsmarting rivals, and bringing a useful product to market.