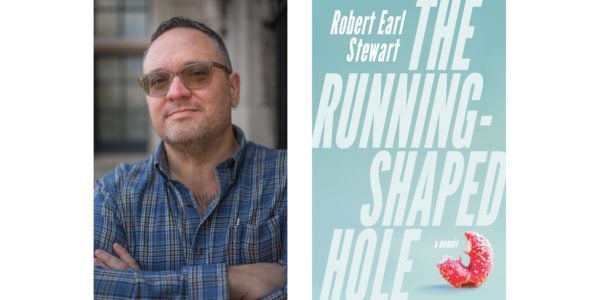 For Robert Earl Stewart, polishing off four cheeseburgers on the way home from work would be only the beginning of a typical evening of gastronomical excess. A former alcoholic, Stewart found solace in 12-step fellowship, but his disordered appetite for food remained unchecked – until he learned to run. A passionate and engaging memoir, The Running-Shaped Hole recounts one man’s changing relationship to his body, his family, and his community.

Stewart is a Windsor-based author and newspaper journalist whose first book of poetry, Something Burned along the Southern Border, was shortlisted for the Gerald Lampert Memorial Award. Despite having conquered a monumental drinking problem, he remained in a state of emotional despair. As he notes, “I whipped myself with self-loathing, and the only salve for the raw wounds was food – my gluttony and shame supported each other.”

A fateful visit to the doctor becomes a turning point. Though embarrassed about his size, Stewart starts to walk in a nearby park. Those walks turn into runs, which turn into races. Over the course of the book, he curbs his alimentary appetites, sheds 140 pounds, trains for and completes the Detroit Free Press half-marathon, and develops a renewed sense of spirituality through his running practice. (The book’s title is a reference to the “God-shaped hole” in our psyches posited by French mathematician and theologian Blaise Pascal.)

Losing weight increases the author’s self-confidence – perhaps too much. A new-found commitment to sticking up for himself boils over into angry incidents. He picks an argument with a Canada Customs officer. He deals with an aggressive neighbour by punching him in the face. Stewart is unflinchingly honest in his account; he writes with a distinctive combination of bravado and self-reflection, sometimes overly hard on himself, but always philosophical about his evolution as a runner and as a person.

Stewart’s prose is lean, enlivened with the occasional poetic flourish. During one run, he sees in the distance Windsor’s waterfront Morton Terminal, whose “winking lights … speckled the towering grain elevators in a bokeh-dot array.” Describing the effects of profuse sweating during long runs, he writes, “I glittered in the sun like a sequined gown.” And with a fine comic touch, he skewers some adversaries, including a protest group that resents the addition of running trails to a beloved local park.

The book includes small, specific details (such as the chafing of nipples under sweat-wicking fabric) that will resonate with fellow runners. But Stewart conveys his athletic journey in a compelling and animated way that won’t leave sedentary readers behind – including gripping accounts of getting lost in the woods and, in one case, running right into a deer. The author captures the reader’s attention and holds it firmly, right to the finish line.