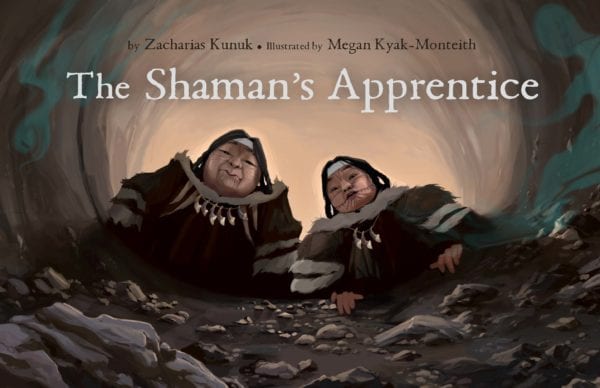 The Shaman’s Apprentice – a picture book based on award-winning Inuit director Zacharias Kunuk’s short film Angakusajaujuq: The Shaman’s Apprentice, in turn adapted from a traditional Inuit story – follows Supijaq, a young Inuk who works as an apprentice to her grandmother, Qunguliq, a shaman. Together, they journey underground to visit Kannaaluk, the One Below, as they try to heal a man who has fallen mysteriously ill and whose symptoms resist Qunguliq’s traditional healing methods.

Rooted in an Inuit world view, The Shaman’s Apprentice invites reflection on the lessons the story imparts. Supijaq, as an apprentice, is positioned to learn from shadowing her grandmother, and Kunuk asks readers to do the same, ending on the question, “What have you learned?”

Inuit artist Megan Kyak-Monteith’s evocative full-page illustrations shift from warm and homey to haunting as the story moves from a recounting of Supijaq’s day working with her grandmother to their more harrowing consultation with Kannaaluk. The small details Kyak-Monteith incorporates, such as characters’ traditional tattoos, add layers of texture to the story. The illustrations work in tandem with the text to form a complete picture of Supijaq’s experience as an apprentice.

Although the story takes a spooky turn, it is ultimately focused on the passing on of traditional knowledge, learning to push past your fears, and the importance of caring for the community. It showcases Inuit culture in a way that is accessible to a non-Inuit audience, with a glossary of Inuktitut words, a pronunciation guide, and an invitation to explore Inhabit Media’s Inuktitut language resources. The Shaman’s Apprentice is an excellent addition to a growing number of Indigenous authored and illustrated picture books.