The Signs and Wonders of Tuna Rashad 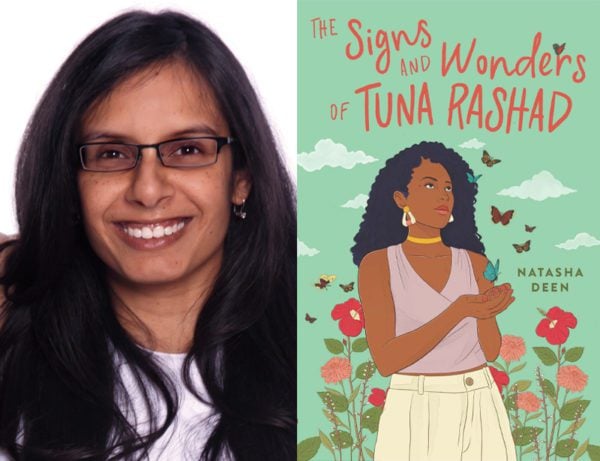 Altuna “Tuna” Kashmir Rashad is a budding screenwriter and children’s swimming instructor living in Ontario, California, who’s on a quest to turn her life into a screenplay – complete with meet-cutes, fun and games, and dark nights of the soul. This summer, she wants to become the heroine of her very own real-life romcom before she heads to the Savannah College of Art and Design in the fall. Her love interest, Tristan Dangerfield, is a mathlete she has liked since freshman year but never had the courage to ask out – until now, just as they’re headed to different colleges far from each other.

Starting with a white lie about a lost sweater, Tuna’s will-they-won’t-they romance with Tristan is a series of shenanigans through which she comes to learn that his “hetero-male” mathematical world view conflicts with her semi-spiritual reverence for her ancestors and openness to the unseen wonders of the world.

Tensions also build around Tuna’s older brother, Robby, dubbed “The Tyrant,” who is grieving the loss of his husband and love of his life. Though Robby’s a doctor with a condo of his own, he is unable to face his loss and constantly drops by the family home unannounced, forcing everyone to keep memories of Robby’s late husband hidden and to silence their own grief. Tuna, however, feels it’s time for Robby to move on, especially when he interferes with her love story with Tristan. She creates an online dating profile for Robby behind his back that is at best a thoughtless humiliation and at worst has unintentional “shades of human trafficking.”

Throughout, Natasha Deen infuses lightness and humour into the heavy subject of grief without sapping its emotional power. Told in the present tense, like a screenplay, the novel’s first-person narration is highly stylized, with screenwriting and movie references and wordplay, which may not be for everybody. Though the depiction of the Caribbean culture of the characters is light-handed for those hungry for such representation on the page, it is refreshing to see a quirky BIPOC protagonist who is unapologetically themselves and a multiracial Caribbean family that shows deep love for their gay son and his late husband. The Signs and Wonders of Tuna Rashad offers all the beats of a healing journey and brings to life the theme that “a heart in love is the loudest sound in the room.”