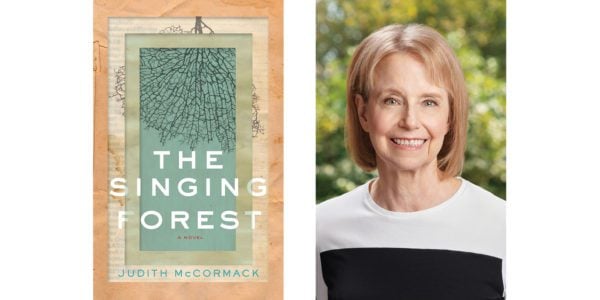 The passage of time can shroud awareness of past horrors. What then happens when an atrocity is unearthed decades after the fact? Judith McCormack’s latest novel, The Singing Forest, confronts this question.

Two Belarusian boys discover a skull in the forest that exhumes a long-buried genocide: a mass grave where Stalin’s secret police dumped thousands of murder victims in the 1930s, many of them Jews. The novel opens at the grave in Belarus with deft use of the omniscient viewpoint, complete with risky personification and aptly gruesome details to evoke a haunted landscape: “It was the blood in the earth, the blood that made the garlic head mushrooms grow in pink.”

Structured as a braided narrative, The Singing Forest alternates between Toronto and Belarus, between time present and the Stalin years. Young lawyer Leah Jarvis hopes to convict and deport elderly Stefan Drozd for war crimes committed when he was a minor. A former member of Stalin’s forces, Drozd fled Belarus for a new identity in Canada. In order to bring him to justice, Jarvis needs evidence; she travels from Toronto to Belarus to excavate facts and interview witnesses. The novel moves between Jarvis’s and Drozd’s perspectives until they converge at the trial.

In a brilliant stroke, McCormack creates a layered depiction of Drozd’s brutal childhood: losing his mother at birth, violently abused, subsisting in rural poverty. He longs for escape, for a better life elsewhere: “Fear lives in his throat, on his scalp, in the tiny bones of his inner ears. Fear is his … negotiation with the world.” This portrait does not exonerate Drozd but puts him in context, layering in moral complexity. These trenchant chapters draw a character more compelling than a one-dimensional monster – a tortured human who became a torturer.

As Jarvis searches for facts to convict Drozd, she uncovers personal mysteries. Orphaned as a child, she is Jewish on her mother’s side, though her relationship to Judaism is fraught and murky. Jarvis is intriguing but paradoxically too distant and opaque to spring to life, her story oddly muffled. The third-person stream-of-consciousness in Jarvis’s chapters includes fantasies, dreams, memories, and the rasp of Drozd’s voice inside her head, interspersed with affidavits, conversations with her boyfriend, colleagues, and witnesses (rendered without quotation marks), and painterly authorial descriptions. This discursive style is disjointed and at times confusing. The Woolfian techniques feel all wrong here, puncturing instead of creating narrative tension.

That said, McCormack’s scope is impressive. The Singing Forest is a crime drama, a historical novel, and a character-driven work. At one point Jarvis muses, “When fragments of leftover history spill into the present. When a living story falls out of the past, redrawing the lines of understanding. A moment that alters the bargain with time.” This novel posits that time does not heal all wounds. Recognition, reparation, and remembrance are urgent.