★The Summer Between Us 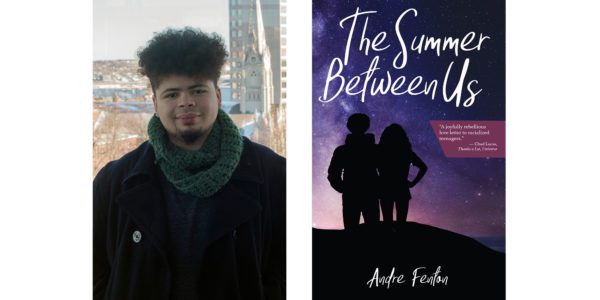 Andre Fenton has delivered a beautifully crafted coming-of-age story in his newest novel, The Summer Between Us. Eighteen-year-old Adrian Carter struggles as he prepares to finish high school and tries to find his place in the world. Does he take off on a tour across the country with his punk-rock girlfriend Mel, or does he accept a scholarship to study business administration at university? Adrian’s teenage angst goes beyond the fear of disappointing the people he loves. He’s also harbouring a secret from his parents, classmates, and almost all who know him: he once had an eating disorder that led him to lose a lot of weight and which had negatively impacted his health.

By centring the story on a mixed-race Black teenager still haunted by his past bulimia, Fenton allows readers to dive deep into teenagers’ interpersonal relationships, and to explore systemic racism and toxic masculinity from a rarely seen perspective. While Adrian feels beaten down by his experiences of racial profiling and societal and peer pressures, he learns to channel that pain into personal and communal healing by participating in an online support group for teens with eating disorders and facilitating a library discussion group for young men.

Fenton’s portrayal of eating disorders among young men provides readers with an emotional journey of betrayal and reconciliation. Tense and emotionally explosive moments are woven among scenes of comfort between Adrian, Mel, and his best friend Donny, so readers are not completely overwhelmed by the in-depth exploration of personal pain.

The book’s Halifax setting is pivotal to better understanding the experience of young Black Canadians in predominantly white spaces. Adrian and his friends learn to rely on each other and other racialized young people in their communities by creating spaces where they feel not only safe but also valued and loved.

The Summer Between Us captures contemporary teenagers’ struggles with social media and offers lessons for young people on owning and telling their stories. Young people see how technology can be used to cause extraordinary damage to a person’s reputation, but also to rally in support of their marginalized peers. The book may also provide solace for young eating-disorder survivors, regardless of gender, by showing them that even though they may feel alone dealing with their disorder, they are not alone in their struggle.