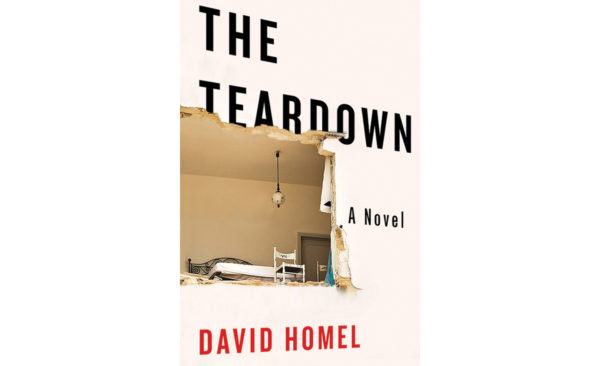 Paul, the journalist at the centre of David Homel’s latest novel, feels stuck. He’s disconnected from his family and believes his profession is dying. He’s grasping at anything that will bring meaning back to his life. In The Teardown, author and translator Homel focuses on the theme of loss: loss of Paul’s daughter, Dana, to mental health issues; loss of a wife who doesn’t need or want him; and loss of autonomy as a has-been journalist ekeing out an existence in the suburbs. These cumulative deficits push Paul to search for meaning in his own life by solving the problems of others – especially Lynne, a woman he meets in grief counselling. Paul’s struggles reach a dual tipping point: he is given the opportunity to cover a story about refugees in Eastern Europe, and the shaky foundations of his marriage are demolished by the revelation that his wife is having an affair.

The Teardown excels as an examination of absence and grief. However, certain elements fail to connect over the course of the entire novel. Major events from the first half are tied up in a cursory way, such that their resolution feels cheap. Dana’s suffering, for example, forms a substantial part of the first half of the novel. But Paul’s reaction to her illness (which may in fact result from a combination of mental disorders) eventually reduces to little more than a recognition that someone is suffering from issues that are even worse.

A similar problem plagues a subplot involving charges pressed against Godbold, Lynne’s ex-husband, who is accused of molesting his daughter. Paul determines to hunt down Godbold and show him a kind of rough justice, even going so far as to park outside the man’s home and watch him. But we hear nothing more of Godbold in the novel’s latter stages, other than a short explanation about an arrest that happens as a fluke of him saying the wrong thing to the wrong person. Both these plot strands feel underdeveloped, with resolutions that are too tidy and dealt with too expeditiously once Paul has figured his own problems out.

Paul does pull himself out of his slump, providing his own story with an upward trajectory. But his earlier preoccupations – the things he spends much of the first half of the novel agonizing over – are more or less forgotten, dispensed with too quickly and easily to be entirely satisfying.