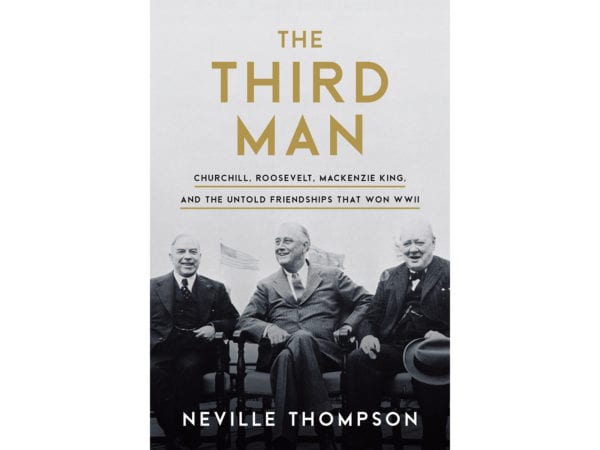 The diaries of Canada’s 10th prime minister, William Lyon Mackenzie King, have been used to analyze Canada at a critical time in its history, as well as his own politics and personal life. Neville Thompson, emeritus professor of history at the University of Western Ontario, is now using the diaries to show King’s perspective on Winston Churchill and Franklin Delano Roosevelt. In The Third Man, Thompson details King’s critical role as both mediator and ally to these two major Western historical figures.

King had long-standing relationships with both Churchill and Roosevelt prior to the Second World War, and The Third Man begins by tracing those in detail. While these relationships were sometimes fraught, as King constantly balanced loyalty to Britain with defending Canadian independence, it is clear that Churchill and Roosevelt valued King’s support, his opinions, and his willingness to serve as an intermediary.

Thompson shows that King was not a passive observer to world events – he always ensured that his role served both his political purposes (his prominence increased Canada’s stature) and his moral convictions (his belief that Germany had to be defeated). King was so adept at navigating between these two titans because he had no wish to be a titan himself. He believed that an intermediary role in world politics was suitable for Canada to play.

With so much detail in The Third Man, it threatens to become tedious. However, there is much to be gleaned that is new to those interested in King, Roosevelt, Churchill, or the interplay among the three. King’s observations on his companions’ physical and mental health provide a lot of insight into what was hidden from the public at the time. It is also clear how much of the Allied war effort relied on the personalities of the men leading it rather than on their countries’ circumstances as a whole; King himself was concerned about “the terrible dangers of a situation like the present, where two or three men do so much in directing the affairs of the world.”

These frank comments cannot be found in many public documents or memoirs, and King was only so candid because he never intended for his diaries to be published. In fact, shortly before his death King identified his entries on Roosevelt and Churchill as the main impediment to making the diaries public. If these passages in particular, or King’s diaries in general, had not been preserved, we would be far the poorer in our understanding of the people and the dynamics that lie behind one of the defining events in 20th-century Canadian, British, and American history.