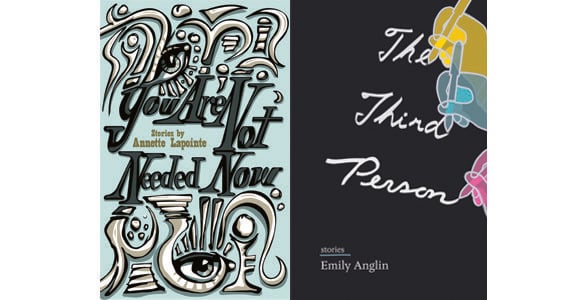 A short story, by its nature, doesn’t start at the beginning, and doesn’t finish at the end. Rather, it parachutes the reader into the middle of a character’s life, and it is up to the reader to catch up: to learn about a protagonist’s essence (or, at least, their essence in the moment at which the story is unfolding) not by being given the full picture, but by being immersed in a close-up of the character’s actions, nervous tics, and manner of speech.

The struggle in writing a good short story is figuring out where to start and stop. There’s a treacherous authorial line between giving a reader too much and not giving enough. Annette Lapointe’s first collection of short fiction, You Are Not Needed Now, and Emily Anglin’s debut, The Third Person, grapple with this, at times successfully, at other times with only very slight miscalculations.

Lapointe, whose debut novel, Stolen (2006), was nominated for a Scotiabank Giller Prize and won two Saskatchewan Book Awards, has written a collection that consists of 11 short stories, most of which take place on the Prairies, with the occasional foray to Vancouver. The settings Lapointe chooses – rural Alberta and Manitoba – feel just as fully realized as her characters, and sometimes moreso. Or, to be more specific, Lapointe’s use of landscape and setting is essential in demonstrating the extent to which place shapes character.

“When You Tilt Your Head Just So the World Will Crack” uses setting (a bus from Snake River, Yukon, shuttling across the country) to propel the reader through the story, which is arguably the best in the book. Its two central characters, Robin and David, meet by happenstance and begin a sexual relationship in plain sight of the other bus passengers as the prairie zooms past outside the window. Eventually, they are booted from the bus “in the middle of the flat nowhere at the centre of the world.” It’s here that the characters most significantly echo the landscape: David breaking down and Robin retreating into herself become manifestations, respectively, of the “flat nowhere” and “the centre of the world” at which they find themselves. It isn’t until they arrive in Winnipeg that their defensive masks go back on.

At times, Lapointe’s stories run a little too long, with too many narratives weaving in and out simultaneously. Moreover, the first story, “The Waiting List for Martyrs,” is an unusual choice to kick off the collection, since it sets up an expectation that the supernatural will feature prominently in the forthcoming entries – an expectation that is mostly unfounded.

While the characters in Lapointe’s stories are often judgmental, those same judgments don’t make their way into the stories themselves. Lapointe writes about sex workers, transgender people, and characters suffering mental illness with a matter-of-fact realism that neither objectifies nor congratulates them, but allows them to appear as living, breathing individuals.

Lapointe’s story “If You Lived Here You’d Be Home Right Now” overlaps with Anglin’s “Inside City Hall” in that both deal with workplace admirers who represent annoyances rather than actual threats to their respective protagonists. As elsewhere in Anglin’s collection, her take on office obsession is eerier than Lapointe’s. The protagonist of “Inside City Hall” is unsure who the anonymous person repeatedly calling her office line is, but puts off telling anyone. Though the story’s resolution is somewhat predictable, Anglin executes it in a way that doesn’t feel artificially cinematic – or even all that exciting. Rather, it feels true to life, which is even more impressive.

Anglin gets the balance just right in “Alma,” a story that feels both familiar and otherworldly. A young woman receives a promising job offer in a different town, only to find the place and its inhabitants aren’t quite what she expected. Instead of leaving right away, she decides to wait things out for a few days. As routine starts to set in for the character, Anglin smartly layers in the thematic notion of an uncomfortable woman who remains in a situation that disturbs her because she fears ruffling feathers, or because the prospect of leaving appears even more bleak.

Even for a genre that gets its kicks from leaving a reader hanging, Anglin’s stories often feel as though they end too soon, at least on an initial reading. The stories can appear to be rapidly approaching a climax, only to have them halt precipitously. While frustrating in the moment, after some time removed from the stories, this approach allows for a developing fascination. Anglin’s stories creep up on a reader, occupying mental space for quite some time after reading them. The concealed details continue to percolate and develop over time.