★The Triumphant Tale of the House Sparrow 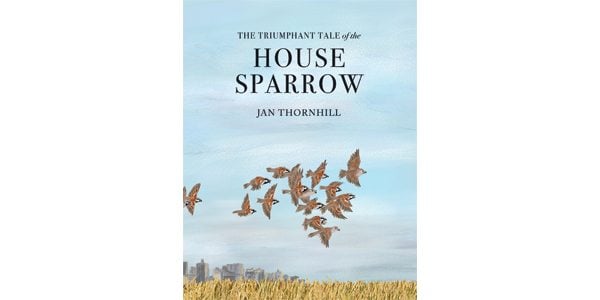 Award-winning author and illustrator Jan Thornhill has a passion for nature that runs deep. From her first picture book, The Wildlife ABC (1988), to this most recent title, The Triumphant Tale of the House Sparrow, Thornhill delivers sound science with breathtaking artwork and beautifully crafted words.

The house sparrow lives alongside humans. It “cleans up after us” and eats pests on farm fields. Long ago, boys took jobs as “sparrow catchers,” in one of the many efforts to control its population throughout history. This “small brown bird” doesn’t seem a likely subject for a book. Humans have tried to get rid of this “despised” creature for 10,000 years, but – unlike the great auk, the subject of Thornhill’s 2016 picture book – this sparrow has proven extremely adaptable. The narrative traces the grain-lover’s prehistoric roots in the Middle East through its migration to India, North Africa, and Europe.

Each step contains surprising details. For instance, “Egyptians were expert bird-netters,” and “a simple sparrow pie calls for the meat from at least five dozen birds!” In Europe, in the 1800s, house-sparrow numbers swelled so much that it could be found “nesting in every crevice, including between the legs of gargoyles.” European immigrants living in U.S. cities missed the bird so much that some were captured in Europe and released in New York. After a few failed attempts, the house sparrow began reproducing in Brooklyn, and, within two decades, its numbers surged across America. Many found it “irritable, intolerable, and lazy.” Others argued it could be “so cheerful, so frolicsome, so amusing!”

Thornhill’s original, descriptive prose is well-researched and engaging, and accompanied by fascinating extras, including a distribution map and an illustrated life cycle of the species.

This information-packed book – exploring themes of conservation and climate change – ensures readers will gain respect for and understanding of this common, but triumphant, bird.