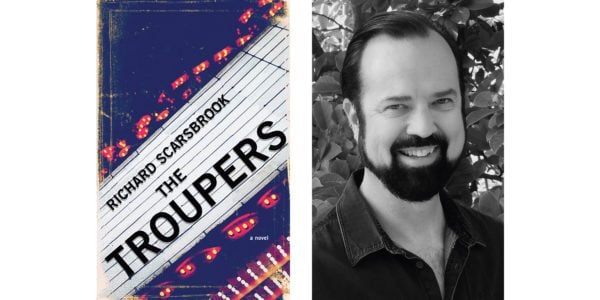 In his 2020 volume On Nostalgia, David Berry points out that the Greek root of “nostalgia” refers to a condition resembling homesickness or, more literally, a pain associated with home. This is particularly germane to Richard Scarsbrook’s latest novel for adults, which focuses on the eponymous family of theatre folk in Niagara Falls, Ontario.

Presided over by narcissistic patriarch John Lionel Trouper, quintuplets Joan, Violet, Olivia, Marigold, and Errol (who serves as the novel’s first-person narrator) are accompanied by their mother, Lily, and bourbon-swilling octogenarian matriarch, Chrysanthemum, a former Ziegfeld Follies showgirl, who now serves as the family’s crisis management guarantor courtesy of her handy chequebook.

The novel opens after the death of John Lionel, a former child star who bullied his children into following in his footsteps in shows he directed with a perfectionist’s obsession. The remaining four siblings (Marigold and their mother died in a car accident) gather for the reading of John Lionel’s will. They are startled by the bequeathal: the bulk of his estate, including the family home and the storied Trouper-Royale Orpheum Galaxie Theatre, will be theirs to divide among themselves if they reunite for a final performance as a theatre troupe.

From this set-up, Errol’s narration flashes back to the siblings’ troubled childhoods in the shadow of their dictatorial father, long-suffering mother, and quietly domineering grandmother. Two things drive the characters: a family-wide devotion to the consumption of heroic quantities of alcohol and old movies.

As children, the Troupers were forbidden to view any Hollywood film made after 1959; when their mother gets into a fight with her husband, her revenge is to spirit the youngsters away to a new movie they have been yearning to see: George Lucas’s 1977 space opera, Star Wars.

Here we run into another type of nostalgia – this time, of the cultural variety. Star Wars, an enormous franchise that is itself a mosaic of tropes and images stolen from earlier films, is a suitable focal point for Gen-X nostalgia. As Berry notes, “the world of the film itself is littered with nostalgic references to glorious things that came before,” and it “often looks like the remnants of something that was once glorious.” This makes it a perfect touchstone for a story about the fading glamour of a theatre family. The problem with leaning so heavily on nostalgia is that it can start to subsume the human story, becoming an exercise in spot-the-reference; the book comes with a six-page filmography noting the movies that crop up in the text.

Scarsbrook has a deft hand with a quip, but doesn’t seem to trust his reader to pick up on allusions or pop cultural references. Perhaps a young audience needs to be cued that John Lionel is named for two members of the legendary Barrymore acting family, but is it necessary to make explicit the provenance of the Overlook Hotel? These elements serve as a distraction from the tale of a fractious, backbiting, and occasionally supportive clan of reluctant stage performers.