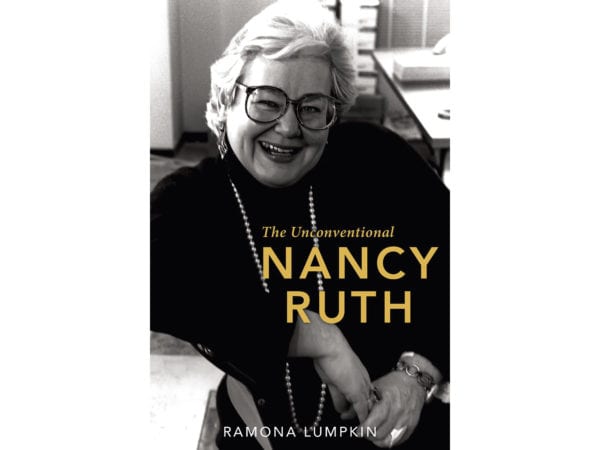 Nancy Ruth was 40 when she learned that her maternal grandfather had successfully argued the 1929 Persons Case, affirming that women were “persons” under Canadian law and therefore eligible to serve in its Senate – to which she was appointed 20-odd years after her discovery.

“I remember my rage that women were of so little consequence in my family that nobody had ever mentioned the Persons Case,” she is quoted as saying in Ramona Lumpkin’s biography The Unconventional Nancy Ruth. Both rage and issues of gender inequality have been defining features of Nancy Ruth’s life.

Born to a family steeped in its own importance, Nancy Ruth (she dropped her surname, Jackman, in the 1990s) was raised in Toronto’s Rosedale neighbourhood, the fourth child and the only daughter – which was the first of many ways in which she would disappoint her father. Growing up in the 1950s, she struggled with learning disabilities and did not fit conventional roles expected of women. She yearned for her father’s approval and resented her mother’s domination by her husband and sons. Years later, Nancy Ruth would come to see her mother’s character as a quiet strength, and no doubt Mary Rowell Jackman helped sow the seeds of her daughter’s feminism. She owned, after all, the finest assemblage outside of Britain of Virginia Woolf first editions, a collection started with A Room of One’s Own.

Nancy Ruth’s story is one of entitlement, set in a world where money and lineage inevitably lead to power. When such entitlements are denied to her as a daughter, she rails against the system yet still benefits from it – she drifts through her 20s, does not earn a paycheque until her 30s. She continues to repeat the patterns of her childhood, seeking acceptance in patriarchal institutions that refuse her: her family’s business, the United Church, and eventually government, when she is defeated twice in runs for public office. (Her CV also includes stints as jewellery designer, fundraiser, management consultant, and professional clown, before she becomes a senator from 2005 to 2017.)

Entitlement, however, is not always a bad thing and can even be inspiring – this is the greatest takeaway from Lumpkin’s biography. Nancy Ruth’s persistence in demanding that which she saw herself, and all women, as entitled to – equal protections under the law, for example, or inclusion within the lyrics of the national anthem – resulted in real change for Canadians through both her philanthropy and political advocacy. Nancy Ruth has been a lifelong agitator, especially during her 12 years in the Senate, with a determination to use the system to change the system. She is both establishment and anti-establishment at once, just one of her many contradictions.

At over 400 pages, The Unconventional Nancy Ruth is too long, bogged down in her wandering years, though it’s clichéd to critique anything associated with this woman for too-muchness. The book succeeds, however, in showing that women are indeed of consequence – this one woman in particular – and for ensuring that Nancy Ruth’s remarkable story receives its place in Canadian history.