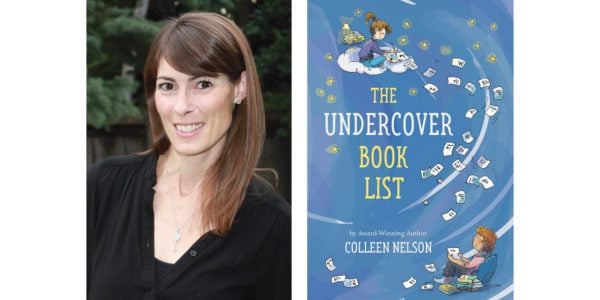 A secret note hidden in a favourite book in the school library. A bookish girl looking for a new best friend. A restless prankster who dislikes reading. These are the ingredients in Colleen Nelson’s The Undercover Book List, an engaging middle-grade novel about friendship, the love of books, and the willingness to change.

The hidden note invites a fellow book lover to participate in an anonymous exchange of favourite books in the school library. Tyson, who delights in defying authority and playing tricks on his fellow students, finds the note and responds to it as a joke. However, stuck with nothing to do when his mother cuts off his access to video games, he reluctantly begins to read and soon finds it’s more stimulating than disrupting class and being sent to the office.

Meanwhile, Jane, the book lover, is missing her father, who has been posted overseas, and is also terribly upset over her best friend moving to a new city. She desperately wants a new friend, and as the correspondence with Tyson gathers momentum, she thinks she’s found one. The pair exchange ideas for books to read as well as confidences, with Jane completely unaware she’s becoming friends with the class troublemaker. As more challenges appear in both their lives, they each rise to meet them, fortified by their love of books and their mysterious friendship.

The Undercover Book List, like Nelson’s Harvey novels, takes an honest look at the emotional lives of preteens. Jane is dealing with loss, fear, and loneliness, while Tyson struggles to shake off his reputation to allow his true self space to grow. Nelson approaches their inner lives with respect and empathy, using books as the healing agent that brings them together.

The plot races along, switching between Jane’s and Tyson’s points of view with each successive chapter. Jane’s chapters are in the first person, while Tyson’s are in third person, which has the effect of making Tyson’s character seem distant in comparison to Jane.

The Undercover Book List will resonate with children who feel unseen, who dream of a friend who understands them, or who are figuring out what kind of a person to be. It’s an absorbing, entertaining, and sensitive story that champions reading and the love of books.