The Weight of Sand: My 450 Days Held Hostage in the Sahara 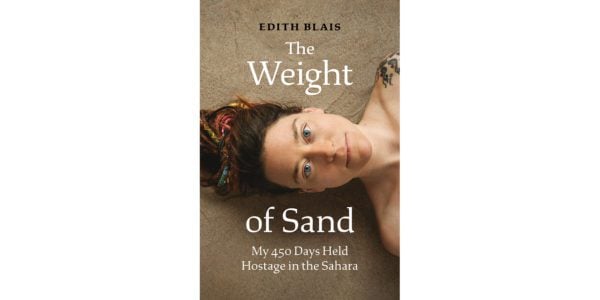 In December 2018, Canadian Edith Blais vanished. The 34-year-old had been travelling for some time with her Italian companion, Luca Tacchetto, on their way to pursue a volunteer work opportunity in Togo. Then, while driving in Africa’s Sahel region, the pair was abducted.

Up until that point, Blais had been an experienced, open-hearted traveller. Having trouble staying in one place for too long, she had explored countries such as Mexico, Guatemala, El Salvador, and Panama. She had slept on beaches, befriended strangers, and relied heavily on both her wits and her optimism.

“I wanted to share with others,” she writes. “To get closer to the earth, to eat with my hands, to walk barefoot, to feed on the elements.”

Fifteen months after their ordeal began in Burkina Faso, Blais and Tacchetto finally reappeared in Mali. They had endured 450 days of captivity and – in a stunning conclusion to their story – escaped and courageously evaded their captors. The Weight of Sand is Blais’s intimate account of that time, a narrative characterized by terror, confusion, deprivation, and loneliness. It is also a depiction of hope – of finding possibility in the bleakest of moments.

It is Blais’s wits and optimism that serve her during those dark days; she maintains an enthusiasm for life despite hardship and finds inventive ways to not only survive physically but mentally as well. She names a spider, builds a sculpture, does yoga. She makes connections with her captors and fellow hostages, through language, meals, and even shared joy.

Perhaps most vitally, Blais writes poetry – verses scribbled on cardboard with a pen borrowed from another prisoner. The book includes a number of these poems composed in secret, her method of maintaining sanity even as reality threatened to overtake her.

On her 244th day of captivity she writes, “Life had been secreting its garden / Enveloped in luminous veins / Its heart beats, unconcerned / And on the resplendent earth exhales again.”

Translated from the original French, Blais’s writing is conversational in tone and simple in style. Conveying complex geographical and political details with clarity, she manages to share 450 days of terrifying monotony with propelling drama. Yet even with thoroughly reported detail, readers who understand that Blais has suffered the unimaginable may find themselves craving a deeper emotional exploration of her capture, captivity, and eventual escape.

What is most impressive about The Weight of Sand is that, despite everything, Blais never seems to lose that initial sense of wonder that first inspired her to explore the world. Her desire for connection, her appreciation for adventure, and her fundamental belief in humanity remains intact, even with all she has endured.

In a poignant concluding section titled “A Letter to Life,” she writes, “Men can be cruel, but they can also be good. I will cherish these hard-earned lessons. I have learned not to take anything for granted.”