★The Whisper on the Night Wind: The True History of a Wilderness Legend 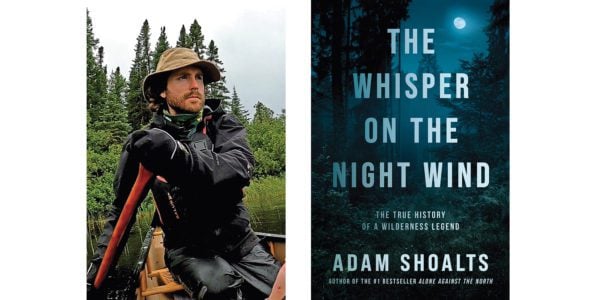 Adam Shoalts’s latest book, ominously entitled The Whisper on the Night Wind, begins matter-of-factly with the author uncovering tales about a monster that once stalked the Melville Lake region of Labrador – in particular, the now-abandoned settlement of Traverspine. Intrigued by the myth and its unique setting, Shoalts enlists an old friend to drive cross-country and navigate hard waters, nearly impassible bush and bog, and the gargantuan Mealy Mountains, all to experience and observe the place where a white-maned creature, sometimes known as the Traverspine Gorilla, was a reputed terror.

This trek could have been romanticized, but it is clear that Shoalts – an adventurer, historian, geographer, and the author of bestsellers Alone Against the North and Beyond the Trees – is not interested in projecting his own wants and desires onto that very specifically chosen wilderness, nor will he let philosophizing and sentimentality get in the way. The two men find the most practical route to a remote location to learn about the unique wildness of the region and to put themselves where settlers of a long-gone era encountered this fabled beast and told their stories.

The place they end up is so isolated and untravelled that it could give the yips to even the most seasoned explorer. Shoalts is precise in his descriptions of setting and his writing is filled with sensory detail. There is also a clever, intentional use of language that heightens tension and lets a creepiness seep into the narrative. He writes that they feel like intruders, as if they are being watched in a place where they are not welcome. The dialogue builds an atmosphere that you might find at the beginning of a horror story – the casual, ill-fated words of characters who will soon be hunted.

The narrative is a slow burn to begin, interspersed with references to old records that repeat details too often – but all of this builds mood and atmosphere. The reader also experiences the grind of the journey through the wild, paired with authentic accounts of discovery, and the gruelling last leg to the destination. The men are not thrill-seekers taking undue risk. They make educated decisions and suffer the terrain without complaint or drama. Shoalts’s companion, Zach, is competent and focused, even when wondering if they’re about to drown in rapids, fall off a mountain, or be snatched up by some beast. Throughout, Shoalts recounts their very ordinary missteps: a forgotten camera, a lost bug net, a tattered jacket.

Whether they’ll find evidence of the beast isn’t the point. They are in the ancient and foreboding region containing the Torngat Mountains (“place of spirits”), the Isle of Demons, and other sinisterly named places that were respected and feared by Indigenous Peoples, settlers, trappers, and adventurers. As with all dangerous and desolate places, we can understand why their myths and legends developed. Whether in the lands of the Windigo, loup-garou, or any other manner of demon, there are tales to keep people out of the dark of night and warn of the dangerous wilds where anyone, young or old, can be snatched up so completely that it seems an act of the supernatural.

Shoalts eventually unpacks the legend of the Traverspine monster. He carefully considers the written accounts and who made them, the experiences of witnesses, the fauna of the place that was known and yet to be identified, and the way that being exposed in such an environment at that period in time would conjure such hauntings. He doesn’t condescend to the settlers who were bound by their own experience and limited sense of the world, nor does he romanticize them. There is an honest curiosity that drives the book, and that is much more alluring than bravado or a desire for conquest.

This openness to discovery endears the narrative to the reader, be it Shoalts’s desire for a better understanding of those who came before and what they endured in a remote corner of the world or his curiosity about the beasts that have outlasted myth and still walk the wildest places on earth, whether we see them or not. It’s fitting that, after coming to a fairly reasonable conclusion about what the Traverspine beast may truly be, Shoalts, safe at home, in the light of day, views remnant video footage from the adventure that chills him and stirs the enigma again. These great wildernesses will always be filled with mystery, beauty, danger, and warning – elements that have brought human lives into stark focus for eons. The author leaves us there, and with a greater sense of what it would mean to lose these places forever, and so lose what human beings are when surrounded by nature.