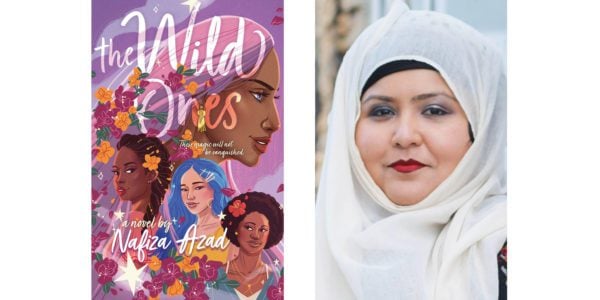 Nafiza Azad’s sophomore novel, The Wild Ones, is a powerful, unapologetically feminist YA fantasy. “We have the temerity to be not just women, but women of color,” the eponymous group declares. “We will not be silenced.” Betrayed and victimized by the adults in their lives, girls become Wild Ones when Paheli seeks them out in their darkest moment and offers escape through a star in their palm. The star signifies that they are no longer wholly human but of the Between, a pathway between the world of humans and the world of magical beings.

United in sisterhood by parallel experiences of trauma, the Wild Ones posit a new, perhaps more feminine, type of heroism. They have no desire to save the world; they seek only to provide comfort and safe refuge to girls in bad situations. Their voices are their weapons – a scream brings evil men to their knees.

When he seeks their help, the Wild Ones protect Taraana, a boy with stars in his eyes whose magic intertwines deeply with that of the Between and of the Wild Ones themselves. It was Taraana who gave Paheli the means to escape her traumatic living situation and to turn other girls into Wild Ones. The preservation of the Between and the continued existence of the Wild Ones’ power depend on Taraana’s continued safety. Therefore, their goal is not only about saving a boy but about protecting the home and family they’ve built together.

The story takes a welcome departure from the usual Western heroism narrative of a solo chosen one. Consent among the Wild Ones is paramount; any girl can opt out of a mission for her personal safety, or leave the group to become human again. Vulnerability is also encouraged; when Ligaya wears black, the rest know to give her space. Their lingua franca is “all dialects of pain.” These dialects are unfortunately ones readers may recognize – rape, abuse, abandonment – but, in a narrative choice both deliberate and radical, most of the Wild Ones refuse to label their experiences when they share their stories. They ask, “Would giving specific names to our tragedies make you know us better?” They speak of grief, sadness, and anger, but mostly they understand each other beyond words. “Pain usually insists on solitude,” they say. But they choose sisterhood instead, because “we see ourselves reflected in each other’s eyes … We anchor each other.”

Moments of joy enrich the novel and are reminders of the Wild Ones’ humanity and youthful hearts. Paheli’s awkwardness in response to Taraana’s flirting is adorable, and the girls buying animal stuffies to hug is heartbreaking. They eat for enjoyment rather than sustenance, and mouth-watering mentions of mango, tteokbokki, and menemen are sensory delights.

The Wild Ones are also a wonderfully diverse group – their cities of origin include Lucknow, Cebu, Suva, and Benin – and the story takes them to Lautoka, Beirut, and Busan. Seeing these places, relatively uncommon in North American young-adult fiction, come alive in this magical world is itself a form of magic.

This isn’t an easy read – triggers include rape and child trafficking – but it is an uplifting one. When society so often teaches women and girls to be small, it’s a pleasure to read of girls who no longer “apologize for the space we occupy in the world.” Amid the magic and adventure is a story of friendship and found family and an invitation to readers: “Be wild.”