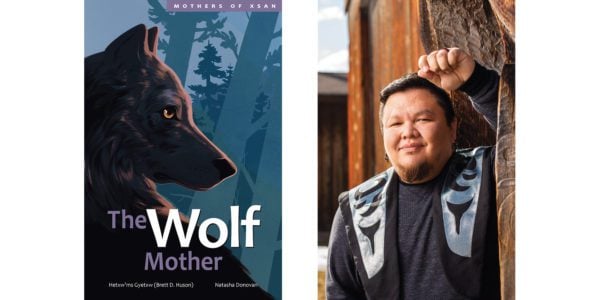 The Wolf Mother, the fifth book in the Mothers of Xsan series, follows a grey wolf from newborn pup to pack leader to Nox Gibuu (Wolf Mother).

The wolf’s journey begins in the spring when “Lasa ‘Yan’tsa, the budding tree and blooming flower moon,” has risen. It’s a time when many animals are born, including six pups. Among them is the runt of the litter, a small black pup, on whom the story centres.

As the days become longer and warmer, the black pup grows bigger and learns about the hunt. When she reaches adulthood more than two years later, she’s finally ready to set out on her own: she joins a new pack, finds a mate, and starts a family. During her third spring, she becomes Nox Gibuu and whelps her first litter.

Along with illustrating the life cycle of wolves, The Wolf Mother explains how they are vastly important to the ecosystem: every living thing within the environment flourishes and thrives because their hunting keeps the herd populations in check.

In addition to definitions of keywords, the book provides a map of the Gitxsan heartland, a description of the people, teachings about the seasons in their language, and a timeline of their moons.

The Wolf Mother, which incorporates Gitxsan world views, shows that like the wolves, the villagers come together to raise the young. Parents know that while they are away hunting and gathering food for the entire village, the remaining adults will provide care and impart valuable teachings to their children.

With numerous teachings offered throughout its beautiful pages, The Wolf Mother provides many lovely lessons for young readers.