This Country of Mine 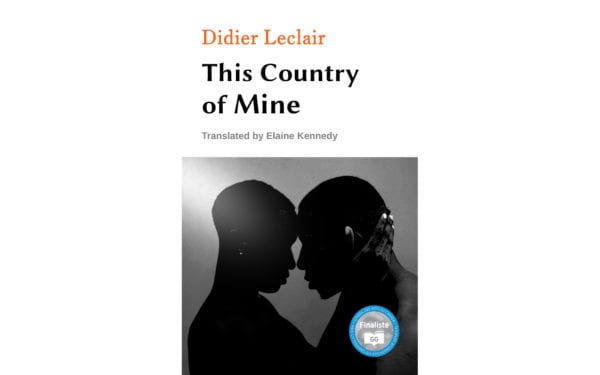 The thematic weight of Didier Leclair’s 2003 novel Ce pays qui est le mien, now in an English translation by Elaine Kennedy, announces itself first in the title. The novel focuses on Apollinaire, an immigrant to Toronto, where he lives with his wife and baby girl. A doctor in his unnamed African home country, Apollinaire now finds himself relegated to a menial job working at a call centre while he endures a seemingly interminable wait for his accreditation to practise medicine. Right from the jump, Leclair tilts in the direction of the duality inherent in the immigrant identity: to which country does the novel’s title refer?

Apollinaire’s skills as a physician serve as the locus of his masculine pride; he travels the streets at night in a borrowed taxi, dispensing black-market medicine to a series of unfortunate outcasts, including an AIDS victim in Regent Park and Nicéphore, a violent and abusive fellow émigré. At other times, Apollinaire attends a gloomy bar where he plays rounds of Scrabble with Captain Koumba, an erstwhile member of the military dictatorship Appolinaire fled who recruited the doctor to tend to the wounds of the men he viciously tortured.

Leclair – who was born in Montreal to Rwandan parents and spent his childhood in various African countries – is unsparing in his depiction of the immigrant experience and the ways the social and political systems conspire to prevent newcomers from advancing. At the call centre, Apollinaire is forced to provide an orientation to a white woman who is soon promoted over him and when his otherwise kindly landlord calls the police because of a disturbance in Apollinaire’s apartment, the constables treat him with barely concealed contempt.

An examination of Apollinaire’s submerged rage lies at the core of Leclair’s short novel, which proves unafraid to portray its central figure in a less-than-saintly light. Apollinaire neglects his family by going out at night and when his wife pushes back, he threatens physical violence. “This woman has made sacrifices for you,” a mutual friend tells Apollinaire. “She’s worked two jobs so that you could study and become a doctor for whites.”

Kennedy’s translation, for the most part, is fluid, only occasionally resorting to clichéd turns of phrase (“The couple was having a hard time making ends meet”) or verbal placeholders. One short chapter told from the perspective of Adèle, Apollinaire’s wife, is jarring in a narrative that otherwise confines itself to the husband’s perspective, though this is a failing of the original work, not the translation. As are the final chapters, which traffic in the kind of easy redemption that Leclair wisely eschews for the balance of the story.

In the end, it is the searing examination of Apollinaire’s fractured identity that resonates most strongly. His desire to flee the moral compromises he made with the violent government of his African homeland is brought up hard against the depredations of a society that refuses to acknowledge his professional credentials or, in any real sense, his full humanity. By the conclusion, it becomes apparent which country is referred to in the title, though the novel’s interest lies in the dramatization of the ambiguity.