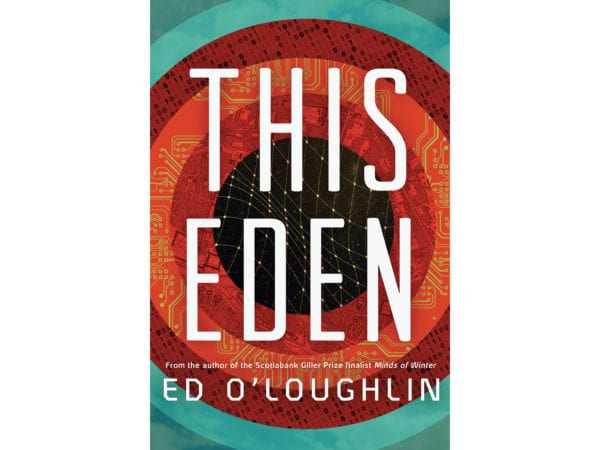 This Eden, the propulsive new novel from Irish-Canadian writer and journalist Ed O’Loughlin, begins with a meet-cute. Alice and Michael are both students in the University of British Columbia’s engineering program, and their first contact is “generated by a random weather event – a light fall of snow.” We see a spontaneous snowball fight, followed by a retreat to warm up in the Museum of Anthropology. One can almost hear the acoustic cover of a decades-old pop song playing behind their first date and then their decision to move in together. “By then, they had fallen in love with each other, in the way that young people do, the first time they have their own place to themselves. Not much thinking was required.”

But This Eden is no romantic comedy.

Within 45 pages, Alice is dead, and Michael has taken a job in Silicon Valley, after being headhunted by the transparently untrustworthy tech übermensch Campbell Fess. (Brace yourself: things change very quickly in This Eden.) This is doubly ironic, given that Michael has little to no tech expertise, and that Fess was the face of the corporate-technological power which the socially aware Alice had begun to work actively against in her final months. Before the reader can fully come to terms with this development, Michael is inducted into the true nature of his job. Supervised by an Irish asset named Aoife and her boss, the mysterious Towse, who may or may not work for a government agency which may or may not be the National Security Agency, he’s to help find a mole inside Fess’s development of Omnicent, “what they call a cryptocurrency, based on a thing called blockchain technology.”

This premise lasts less than 10 pages, before O’Loughlin pulls the rug out from under the readers again.

One quickly gets used to that feeling: This Eden is a series of McGuffins within McGuffins, cover stories under cover stories, red herrings inside red herrings, as Michael, Towse, and Aoife are launched into a worldwide pursuit that takes them to rural Uganda, Jerusalem, Paris, Alexandria, and even Bayonne, New Jersey. Who is chasing them? Why? What are the secrets at the heart of Omnicent? Who is pulling the strings? And what the hell is blockchain technology, anyhow?

Confusing? A little. Thrilling? Very much so.

This Eden is a delight, a rollicking ride that never lets up, with a surprising – and emotionally rich – ending. And if that were the sum of it, This Eden would be a terrific read. But, as readers of O’Loughlin’s Giller-nominated, multi-faceted historical mystery Minds of Winter might have guessed, there is much more to the novel than that.

Threaded through this satisfying techno-thriller is a powerful consideration of the nature of our existence and the very structure of the world around us. In part, this is a result of Towse’s ongoing interest in – and pontificating on – cultural systems and beliefs, from the intersection of religions in historic and contemporary Jerusalem to the beliefs of the Raelians (“It’s a UFO cult, but quite a nice one …”) to the “Karamojong people of eastern Uganda [who] believed, before the missionaries got to them, that God had given them all the cattle in the world. So when they rustled from neighbouring peoples, as they religiously did, it didn’t count as stealing.” In fact, one of the key questions underpinning the novel comes in consideration of the Karamojong: “Who spoke to the Karamojong … Who told the Karamojong that the world’s cattle, which they worshipped then as we now worship money, were their birthright alone?”

While this isn’t the sort of question one expects from a thriller, it fits comfortably in This Eden, a novel as relentless in its pursuit of deeper understanding as it is of fast thrills. The approach extends to the characters as well. This adventure, this headlong rush, is rooted in Michael’s grief, an understanding built upon as we learn of Aoife’s past, her own losses, and internal conflicts. It is a testament to O’Loughlin’s skill that, while Towse is drawn – deliberately – as an almost caricature-level enigma, and the other characters are largely helpless in the momentum of the plot, the individual stories and development of Aoife and Michael are never sacrificed for the sake of the story. Each has a point late in the book when they actively resist the narrative machine: it’s a moment familiar from many thrillers but here carries emotional resonance and force. That’s typical of This Eden, which sneaks up on you at every turn and genuinely thrills.