★This Is How We Love 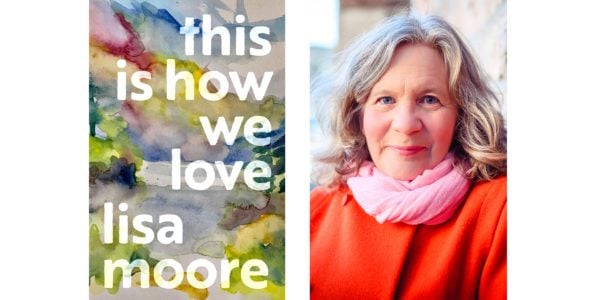 Lisa Moore’s latest novel contains all the hallmarks that fans of the St. John’s author have come to expect: tightly constructed chapters that paint vivid images despite their almost minimalist prose; dialogue and turns of phrase that can crackle with humour or hit like a punch to the gut.

In many ways, This Is How We Love is an emotional companion to her 2018 novel February. That story, based on the 1982 Valentine’s Day sinking of the Ocean Ranger oil rig, examined the legacy of grief through a tragic moment in Newfoundland’s collective history. Here, she reveals the various ways love drives our actions and shapes our lives. Like grief, we never know when it will show up. Love can be tightly compartmentalized and hidden away or flow like a rushing river. Sometimes it’s celebrated and sometimes it’s scorned, and often we have no control over either.

Moore’s multi-narrative novel begins with an act of violence. Jules is on vacation with her husband, Joe, when the dreadful phone calls begin. Their 21-year-old son, Xavier, is in critical condition at a St. John’s hospital after being beaten, stabbed, and left for dead in a snowdrift.

The next chapter switches to Xavier’s perspective as he’s being transferred to the hospital. He desperately craves his father’s grounded sense of humour over his fierce mother’s presence, knowing she would be panicked and of help to no one. As his body begins to fail, Xavier tries without success to communicate that he needs to call his girlfriend, Violet, whom his parents have never even met despite the fact that they live together.

Xavier, believing he might die without seeing his loved ones again, blames an unnamed witness for the stabbing. It is later revealed that this woman – who “he’s been stuck with” since their childhood days of pogo sticks and store-bought candy – is Trinity, and her life story is in many ways more harrowing than this singular act of violence against Xavier.

As the novel unfolds and the details of that night are disclosed, the narrative shifts around in time and reveals other relationships. We learn about Jules’s connection with her mother-in-law, Florence, and Trinity’s perfunctory relationship with Mary, who became her foster mom after she was abandoned by her biological parent. The long-time bond between Trinity and Xavier is also slowly unveiled; despite Xavier’s refusal to admit it, the two are connected by more than just circumstances.

Throughout the novel, physical objects stand in for emotions, particularly across generations. There’s the car given to Trinity by the paternal grandfather she never met, in which she imagines her escape, and the pasta maker she gives to Mary, which has them working together for one hopeful night. Xavier wears his grandfather’s suit to prom, which magically fits after Florence makes minor adjustments, much to Jules’s surprise.

Over the past couple of years in isolation, many people have been re-evaluating their lives, and while This Is How We Love isn’t a pandemic-set story, there is something insular about how all these relationships are revealed, despite the interwoven stories and timelines. Here, instead of masks, there are mittens. The January 2020 blizzard that bombed Newfoundland with massive snowfall and created drifts up to 15 feet acts as a backdrop to the events, and Jules has to fight her way through a dangerous closed-down city to get to Xavier at the hospital. It’s a variation on the cartoon mom who finds the superhuman strength to lift a car off her child – but Jules’s maternal panic is very real.

Moore is at her strongest when she writes about ineffable bonds in all their forms, bringing to mind works by Anne Enright and Deborah Levy, both of whom have used family as a device to interrogate women’s hidden lives and desires. Nuanced and heartfelt, This Is How We Love ranks among Moore’s best.