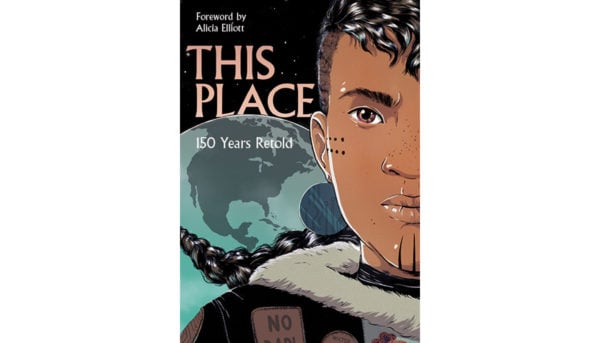 While much of Canadian history is fascinating, most citizens have heard only a one-sided account. For many Canadians, there was (and sometimes still is) a disconnect between the “facts” we’re taught in school and the stories we’re told at home or at gatherings. This is especially true for Indigenous Canadians who for many decades were legally prevented from telling their stories, because of various potlatch-type laws or the trauma inflicted by residential schools.

There have been changes in recent years but there’s still a way to go – especially when most students continue to learn Indigenous history and reconciliation via the writings of Joseph Boyden, Brian Moore, and Gord Downie,  while the works of Cree author David A. Robertson are included on the Edmonton Public School Board list of  “Books to Weed Out.”

Robertson is one of the writers in This Place: 150 Years Retold, a stunning graphic anthology with a forward by Alicia Elliott, that showcases 11 Indigenous writers, eight illustrators, and two colour artists. It presents Canadian history over the last 150 years from multiple viewpoints, including Métis, Inuit, Dene, Cree, Anishinaabe, and Mi’kmaq.

The anthology is visually gorgeous. The cover, by Métis artist Natasha Donovan – who also illustrates Jen Storm’s powerful but harrowing “Red Clouds” and Robertson’s First World War story “Peggy” in the collection – features an arresting image of an Indigenous youth, staring straight ahead in a bold, almost defiant, way. The interior artwork is impressive and varied from full-colour pages to simple, yet meticulously drawn, black-and-white inking to more stylized illustrations bursting with imagery and charisma.

Each story is powerfully conveyed, reflecting a time and moment in the Indigenous history of Canada. A few stray slightly into didactic territory but the teaching moments don’t overwhelm the stories. Sonny Assu’s “Tilted Ground,” Katherena Vermette’s “Annie of Red River,” Richard Van Camp’s “Like a Razor Slash,” and Robertson’s “Peggy” recount the lives and actions of actual historical figures. Vermette’s story about Annie Bannatyne, a little-known Métis community builder in Winnipeg, is one of the most empowering works in the collection. Chelsea Vowel’s “kitaskînaw 2350” is a highly original speculative-fiction piece in which a Cree youth from the future is sent back to 21st-century Western Canada and witnesses the ravages of climate change. “Rosie,” by Rachel and Sean Qitsualik-Tinsley, is a nod to Inuit shamanism and its battle against assimilation, while “Nimkii,” by Kateri Akiwenzie-Damm, is a heartbreaking story about two Anishinaabe foster children.

This Place: 150 Years Retold is a fantastic teaching tool for junior and high-school students and a great read for any age. And yet it barely scratches the surface of Indigenous history and storytelling. Hopefully this is just the first of many anthologies to challenge that long-taught, one-sided narrative.