This Strange Visible Air: Essays on Aging and the Writing Life 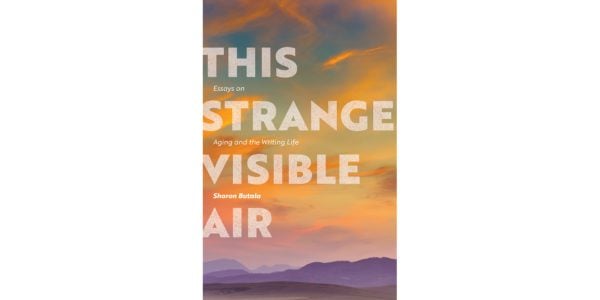 Sharon Butala bookends her new essay collection with ruminations on the plight of the elderly in contemporary society. Railing against ageism in the opening essay, Butala laments that in the industrialized West of the 21st century, old people are judged “in terms of the values, abilities, and desires of the young. By such standards we old can only fail.” The volume’s closing essay, a meditation on the COVID-19 pandemic, mourns the disproportionate number of infections and deaths among residents of long-term care homes – more evidence that a society that fetishizes youth has summarily ignored its elderly citizens.

The righteous indignation that Butala musters in these pieces is bracing, but it belies the grace and humour with which she approaches her overarching theme: the nature of aging and the wisdom it imparts on those lucky enough to be blessed with a long, healthy life.

Now 81, Butala is frank about the slings and arrows that befall one in the winter of life, including in her collection both a piercing examination of loneliness and a ruminative piece about being misdiagnosed with macular degeneration and having to come to terms with the possibility of living out her days without eyesight. She takes an inventory of her life as measured by the boxes of books and papers she removes from storage, their contents given away or destroyed. And she confronts the dangers of being old in public, especially on Calgary Transit, where her age and status as a single woman combine to make her doubly vulnerable.

Though the essays are imbued with an acknowledgement of that vulnerability, what comes through most consistently is Butala’s strength of character and vision, and the extent to which she has remained true to her ambition since becoming a published writer in her 40s. The entry “Vanished without a Trace” provides a thumbnail précis of Butala’s literary career, beginning with her early fame and culminating with her winning, in 2018, “an award designated for ‘emerging writers.’”

An extended meditation on the nature of evil feels somewhat out of place, though its juxtaposition with “The Murder Remains Unsolved,” about a notorious Saskatoon crime that has obsessed Butala since the 1960s, gives it added resonance. The rape and murder of Alexandra Wiwcharuk provided fodder for two of Butala’s earlier books, the 2008 nonfiction work The Girl in Saskatoon: A Meditation on Friendship, Memory, and Murder and the 2018 novel Zara’s Dead. Here, she revisits her experience investigating this case from the perspective of the present, and what’s most apparent is the vast fount of wisdom Butala’s experience has instilled in her.

Butala’s indignation at our indifference toward (or outright derision of) our older societal cohort is well taken. Many African and Indigenous societies do not denigrate their elders – in fact, they respect and even revere them. Butala’s sensitive, carefully crafted essays testify to the wisdom of this approach: there is great empathy and understanding here, for those who care enough to pay attention.