★This Time, That Place: Selected Stories 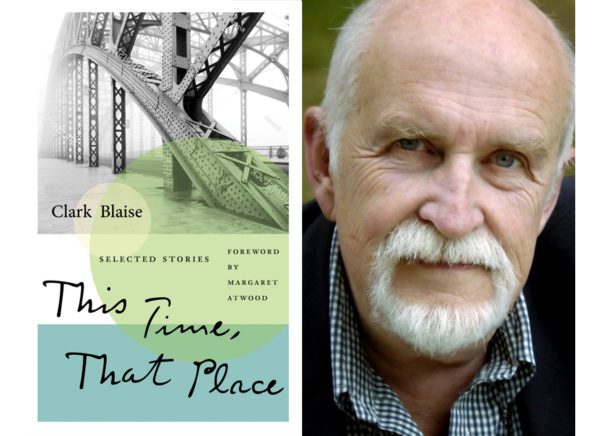 The Germans, naturally, have a word for it. The word is dunkelblau. It’s a colour, a deep blue of the kind usually associated with nighttime. But in Clark Blaise’s story of the same name, dunkelblau takes on larger, more associative connotations.

The story focuses on a Pittsburgh youth by the name of Willi Nadeau, a child who had “lain abed since birth, dumb and apparently unreachable, his bones as fragile as rods of hollow glass.” The opening line sketches the character in quick, lithe strokes using the kind of unadorned language that has earned Blaise a reputation over the last 50 years – among an admittedly limited but hugely appreciative audience – as one of Canada’s finest literary craftspeople. Willi’s mother is a painter, who creates watercolours in her studio while the strains of Mozart waft out from the turntable in an adjoining room.

Mother and son share an unspoken code attached to dunkelblau, a word the child finds amusing, though, as a young man in the immediate aftermath of the Second World War, he remains innocent of its provenance as an “enemy word.” For Willi, the term comes to refer to everything from a difficult or impenetrable story to his mother’s headaches. It’s a linguistic tactic – the exploration of a word’s edges and implications – that is all over Blaise’s short fiction, which is alternately imagistic and highly specific.

The twin qualities appear in the bleak and unforgiving description of a Montreal winter: “The sky is a pitiless, cloudless blue, and tons of sulphur are pushed into the shrunken air.” Or elsewhere: “Snow blurred the arc lights. The wind was dying. Every second car was now a taxi, crowned with an orange crescent. Slushy curbs had hardened.”

What we see in these moments is a writer almost preternaturally adept at noticing things: the contours of light, the way a sky can come across as “pitiless,” or how the winter curbs become “hardened.” Born in the U.S., Blaise writes Montreal with the attendance of a rapt outsider who nevertheless finds in his adopted home a clash of languages, cultures, and people that invigorate and rejuvenate him. In the classic story “I’m Dreaming of Rocket Richard,” the young protagonist travels with his family to spend Christmas with cousins in Florida; what strikes him immediately is the poverty of the signage, which appears in only one language, indicative of “the satisfaction that their version said it all.”

This complacency is entirely absent from Blaise’s stories, which travel from Pittsburgh, Cincinnati, and Orlando to the streets of Montreal and the slums of Calcutta. (Or, almost: the story “Going to India” features a protagonist accompanying his Indian wife and their son on a plane ride to the eponymous country; it ends before they actually arrive.) What the selections in this generous compendium of the author’s short work demonstrate is the cosmopolitan nature of Blaise’s worldview: “How I Became a Jew” is an incisive comment on American racial animus, while “A Class of New Canadians” subtly excavates the inconsistencies behind a national policy of multiculturalism.

For all their autobiographical resonance and surfeit of incident, Blaise’s stories are not primarily about plot. “At the Lake,” one of the best stories in a collection of uniformly fine work, is virtually plotless, but nevertheless evocative in its description of an idyllic lakeside retreat tinged with darkness – a reference to carp as “garbage fish” and the climactic encounter with the area’s leeches provide the otherwise gentle and pastoral story with a creeping undercurrent of dunkelblau.

“Watercolour must come down like rain,” the maternal painter in “Dunkelblau” tells her son. “It should come quick like a shower and make everything else shine, like rain.” It’s a perfect description for the sublime technique and linguistic finesse showcased in these inestimable short works.