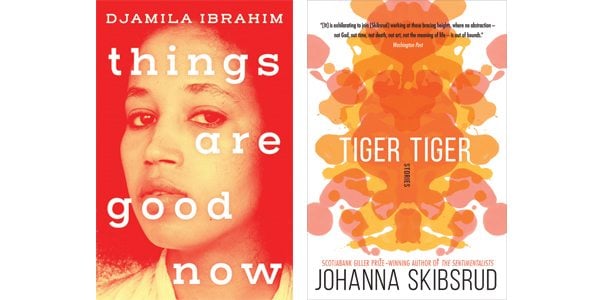 A Pair of story collections from Djamila Ibrahim and Johanna Skibsrud shares one aspect in common: both are tightly organized around a central theme.

Ibrahim’s debut collection focuses on the immigrant experience, as well as on the experiences of those left behind in the home country. Her characters move from Ethiopia to Canada, but also travel in less expected directions – from Addis Ababa to Dubai, for example. While the stories are all political, they do not share a uniform opinion or ideology.

In the first story, “Little Copper Bullets,” Aisha has spent 12 years in the Eritrean resistance army. After liberation, the men who fought were rewarded with government jobs while the women were forgotten: “Female fighters deemed valuable and admirable in the field were seen, in a time of peace, as too hard-headed and independent to make good wives and mothers.”

Aisha moves to Canada, where she enters into a relationship with Adam, who is Ethiopian – something that would not have been possible back home. When ongoing border skirmishes in her native country develop into something more serious, Aisha feels that she could be of service in her native country; in Canada she feels she is of no use. She claims to prefer “the hardship of her homeland to the daily little humiliations she suffer[s] in Canada.” Ibrahim’s story asks the increasingly pressing question, “What does it mean when the place you consider home cannot accommodate the person you want to be?”

“Not a Small Thing” opens with a woman having her hijab pulled hard enough for her to fall over. The woman, Selam, is an estranged member of a group of four childhood friends; the other three reflect on their political awakening together, in particular the relationship between the narrator (an atheist who grew up Pentecostal) and Selam, who grew up in a non-observing Muslim family. The rift between the two friends opened when Selam, long interested in religion and the history of theology, decided to start wearing the veil. There are hints that this is one of Ibrahim’s earlier stories: the thinking is clearly nuanced, but the delivery has a tendency to swerve into didacticism. In other stories, the politics is more seamlessly woven into events and situations rather than being hammered home through expository dialogue.

The title story is one of the collection’s most impressive. It focuses on two siblings, Alem and Beniam, the narrator. Alem has been imprisoned for her involvement with Ethiopia’s underground resistance; after her release, she and Beniam try to make a life for themselves in Canada. As the story progresses, we realize there is a very specific reason – beyond what seems appropriate given her experiences – that Alem is bitter and withdrawn. This secret is one of the book’s artful touches: it’s undeniably dreadful while being completely understandable.

Johanna Skibsrud’s stories focus less on the political issues of the here and now and more on contemporary habits and behaviour, which are magnified until they reach absurd proportions. In one story, a new museum opens that contains all of human history. Three visitors stumble across a door that might or might not be part of an exhibit. When they walk through the door, it dawns on them that “outside” – a concept that had hitherto been only theoretical – truly exists.

The stories encompass a wide variety of semi-fantastical scenarios that also reveal truths about human relationships. There’s the scientist married to an academic whose chosen field – life-extension sciences – has become fashionable in the popular culture. Her reputation eclipses his, even as he tries to make a splash by bringing an extinct tiger back to life. There’s the Rememberer – a girl taken from her family at the age of six to become the repository for 200,000 years of world history. “The Last Frontier” is about a reality TV contest for which the prize is leaving planet Earth. What starts off as a bit of a laugh quickly becomes serious when the ratings drop: “Nobody talked anymore about future seasons – and nobody talked about bringing the pioneers home.” The story points out that as a society, we have decided that what happens to the lives of people who have served as our entertainment – whether wittingly or unwittingly – is truly not our problem.

Skibsrud’s writing is a pleasure, with its shortish sentences, snappy prose, and mixture of formal speech and slang combining to create a recognizably 21st-century voice. One minor criticism: occasionally an individual story feels as though its own world is not completely coherent, leaving readers to wish that all the dots had been connected or a greater motivation hinted at.