Trumpocracy: The Corruption of the American Republic 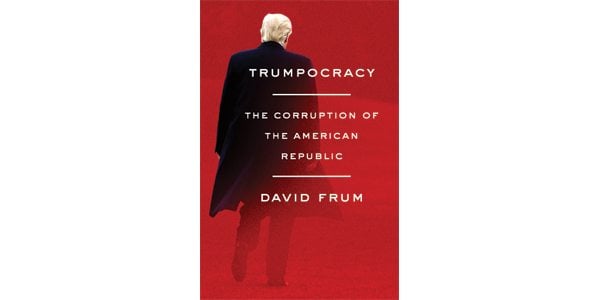 David Frum is a conservative. He has been affiliated with both the right-wing U.K. think tank Policy Exchange and the American Enterprise Institute, and was a senior adviser to former New York mayor Rudolph Giuliani during not one, but two presidential runs. He favours low taxes, limited government interference in the lives of individuals, and robust immigration control. As a speechwriter for former U.S. president George W. Bush, Frum was instrumental in helping coin the now notorious designation “axis of evil” to describe Iraq, Iran, and North Korea.

Though a number of Frum’s more hard-line views (on same-sex marriage, for instance) have moderated over the years, it seems passing strange to find the Canadian-born political commentator’s name on a book explicitly decrying the depredations of the Republican president who currently sits in the Oval Office. But Donald Trump’s impetuosity, policy ignorance, and sustained assault on the norms of American democracy have forced some observers to adopt positions they never considered possible. “A few days before the 2016 election,” Frum writes late in Trumpocracy, his new anti-Trump polemic, “I posted an essay at the Atlantic to explain my intention to do something I once never could have imagined: cast a ballot for Hillary Clinton for president.”

In the very next sentence, Frum goes on to reassure readers that he “was not voting for her,” but instead “for the American system.” So let us not assume that Trump’s impact has been sufficient to transform Frum into a full-fledged, bleeding heart liberal. Frum’s point – here and throughout his book – is that one need not be a registered Democrat or a dyed-in-the-wool social justice activist to recognize the real and pressing threat Trump poses.

First as a candidate, and then – improbably and still somewhat unbelievably – as president, Trump has, in word and deed, not only sullied the high office to which he was elected, but called into question the resilience of American government itself. His bullying, insulting attacks on political opponents and individual citizens alike; his castigation of a free press; his vilification of his own national security apparatus and justice department; his increasingly dangerous nuclear brinkmanship; his willingness to court the approval of hostile foreign governments and domestic white nationalists: all this and more tears at the principles and the very foundations of the institutions that support and sustain the constitutional democracy the U.S. has enjoyed since its founding.

In making this case, Frum recounts a litany of lies and malfeasance on the part of the president himself – and the enablers in his party and the White House who prop him up for their own self-interested reasons. None of this is new, and, for good or ill, Frum lacks the gossipy, insider tone that Michael Wolff brings to his new Trump book, Fire and Fury. What we are left with is a recapitulation of asinine presidential comments and mind-boggling, semi-literate tweets that – while damning on their face – have also been well rehearsed in the past two and a half years by an over-saturated media marketplace.

More than anything else, it is the speed and ubiquity of the modern media cycle that ultimately works against Frum. Some of the material in Trumpocracy (such as the assertion that Trump “defaulted” on his pledge to move the U.S. embassy in Israel to Jerusalem) was out of date before the book even hit store shelves. The rest has already been exhaustively covered elsewhere, and Frum has little to add in the way of original analysis or commentary. Still, it is astounding – not to say infuriating – to see a preponderance of evidence against Trump’s suitability for high office gathered in one place, and attributed to an author with such impeccable Republican bona fides, to boot. The degree of animosity toward the current president might reasonably be measured not in the extent to which he has alienated previous enemies, but the degree to which he’s lost the approval of those who should have been counted as friends.