Try Not to Be Strange: The Curious History of the Kingdom of Redonda 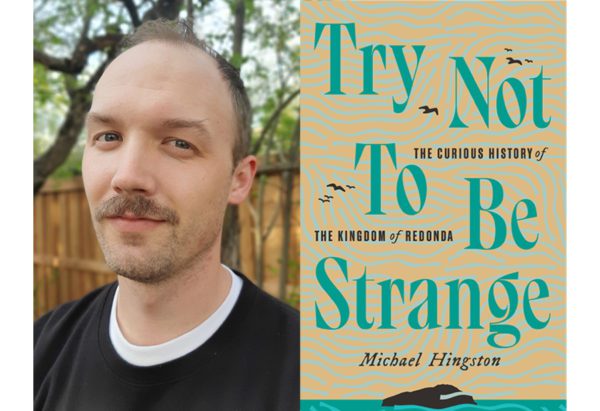 In Try Not to Be Strange, Edmonton author (and publisher of Hingston & Olsen Publishing) Michael Hingston happens upon the work of Javier Marías, the famous Spanish writer and translator, and finds an odd thread in Marías’s novel All Souls that he pulls until he has uncovered the vast and storied history of the Kingdom of Redonda. Curiosity turns to obsession as Hingston follows the lineage of this reality-bending nation and studies its place in the literary world – from Redonda’s geographical origin as a real, desolate island near Montserrat, where a father boldly claims the place and gifts it to his son (prolific Decadent movement author M.P. Shiel), to the creation of a figurative kingdom of the mind (primarily conjured in early-20th-century London), where the crown is passed down from writer to writer and entire royal courts are created.

The men who initially build this fictional nation are troubled searchers, certainly in the case of M.P. Shiel and his successor, writer and publisher John Gawsworth (born Terence Ian Fytton Armstrong). They find themselves increasingly lost in an evolving cultural climate, yearning for other realities and identities and mythologizing the aging writers they admire, as well as their favoured contemporaries. They are also mostly disastrous in their personal lives, neglectful of their families and heinous to the women that suffer them, as they grasp desperately at this imagined kingdom to elevate their standing.

Redonda may be a stronghold for legacy, past glories, or the recognition of some elusive greatness that the world simply is not privy to, but whatever it means, the island’s story is carried on by these men until it eventually falls under Marías’s steady figurative rule (there are other claimants, it should be noted, especially those keener to tout the physical territory itself, rather than any nationhood imagined from afar). Also known as King Xavier I, Marías (who died on September 11 of this year) did more than any other custodian to grow Redonda’s myth and build its stories into the fabric of the literary world for those savvy enough to pick it out and let Redonda draw them in.

Hingston’s exploration of the Kingdom of Redonda is almost a literary detective story. He finds himself buying auction lots and antique editions of books that hold the secrets of Redonda and travels to parts of the U.K. to study archives and speak to those who knew the authors that served the fantastical yet real kingdom over the years. He even embarks on a harrowing and sobering expedition to the island (a part of Antigua and Barbuda), which brings his literary, philosophical, and physical odyssey into much starker relief.

Try Not to Be Strange is a passionate and skilfully written exploration of an extraordinary world and those who search for such places to get to the heart of what stories really mean. Hingston’s thirst for deeper knowledge is palpable, and it illuminates what the kingdom might really stand for. As the author states, Redonda is “as much a story of missing books as it is finished ones.” The truth it holds is in the unknown along with the known, in the ellipsis and the omitted lines. If a writer of fiction mixes reality and fantasy to serve a greater story, one that is fluid and alive, perhaps this is why they were chosen as the custodians of this peculiar kingdom.