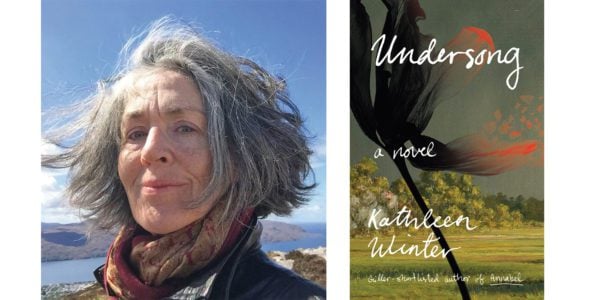 She gave me eyes, she gave me ears;
And humble cares, and delicate fears;
A heart, the fountain of sweet tears;
And love, and thought, and joy.

So wrote William Wordsworth of his sister, Dorothy, who, as their “eyes” and “ears,” was a muse to both him and fellow Romantic poet Samuel Taylor Coleridge. On the eve of the 19th century, the three formed a kind of spiritual trio, the men turning to Dorothy for her instinctive, unpretentious approach to the world that tempered their endless intellectualizing and tendency to poet-splain.

Dorothy devoted her life to her famous brother, acting as his caretaker, secretary, and reader. Though not a poet, her own writing voice was both effortless and unique; one scholar called her “the most distinguished of English prose writers who never wrote a line for the general public.”

Dorothy’s inscrutability and her obvious creative gifts have made her attractive fodder for writers and biographers and for those seeking alternatives to the typical genius-narratives associated with the Lake Poets. The newest addition to that growing library is the luminous novel Undersong by Kathleen Winter, author of Annabel (2010) and Lost in September (2017), which casts its lot in fully with Dorothy Wordsworth as selfless sibling and gifted observer of and communer with the natural world.

It is decidedly unsympathetic toward William, who, in his compulsive stealing of snippets and phrases from his sister’s work to feed his own, comes off at best as a magpie, at worst a parasite. Without the starter Dorothy gave to his poetic sourdough, the novel suggests, William – whose literary powers were already in decline during the period Undersong depicts – was creatively impotent.

Instead of aligning her narrative directly with Dorothy, or even William, Winter has created a fictional intermediary, James Dixon, a local jack-of-all-trades whom William hires to help around Rydal Mount, the Wordsworth home from 1813 to 1850. It soon becomes clear that James is expected to do more than fix wheel-barrows. He’s to play fraternal surrogate by taking Dorothy on the long hikes she adores, which William, with his important career, no longer has time for. Whenever Dorothy becomes agitated or depressed, James is to administer the laudanum on which she’s becoming increasingly dependent.

But most crucially, he’s charged with doing William’s dirty work: scouring Dorothy’s journals for observations to incorporate into his poetry. It’s theft, regardless of William’s hollow justifications or James’s attempt to soften the truth with metaphors – like this one, tailored for the colony of bees to which his narration is addressed: “The words he fished or made me gather and move from her world to his own were like pollen and nectar yet collect. We harvested his sister’s weightless and golden thoughts. He did not have anything like those in himself.” William is all about text, about linear containment; Dorothy about sprawling, spontaneous subtext – the undersong of the title.

Which isn’t to suggest James is indifferent. Though he does his boss’s bidding, his allegiance is squarely with Dorothy, in whom he recognizes something wild (“Right inside her was the weather!”), vulnerable, and endlessly intriguing. The men’s difference in empathy is put in stark relief in a scene where James suggests looking in Dorothy’s red diary, which William dismisses as “no use to anybody at all. It is nothing but a record of my sister’s feelings” – an offhanded cruelty which echoes prevailing attitudes of men toward women in general.

An exception to this is found in William Blake, who, Winter hints, sees in Dorothy a fellow visionary. When he drops by Rydal, something akin to a beam of light passes between them. Dorothy’s choice of friendships with women outside Rydal is also revealing: the painter and poet Mary Barker lives contentedly and thus shockingly unmarried and alone in a nearby cottage, while the writer Mary Lamb also has an unusually intense relationship with her brother, Charles. When Dorothy goes to visit Lamb in her shambolic London home, James, serving as our eyes and ears, witnesses an almost alchemical connection between the women, who claim to communicate without speaking. Dorothy, he realizes, is attracted to the darkness and danger in Lamb, who murdered her own mother and, like Dorothy, goes through long periods of mental instability.

Undersong isn’t plot-driven; indeed, at times it feels circular, as if it’s saying the same thing in multiple ways. Given its subject matter, that may be part of the point – and the manner in which it makes that point is consistently elegant and original. It is very much a book about language and atmosphere. Winter mimics period style beautifully, and she also infuses the novel with unconventional touches – like the brief interstitial sections narrated by a sycamore tree on the Wordsworth property – that arguably conjure the idiosyncratic spirit of her heroine better than any first-person narration could have achieved.

At one point, Dorothy refers to a window in her bedroom that James can’t see. He wonders briefly if she might be truly mad, until a member of the household staff confirms that a window was there, but that it had been bricked in to avoid the window tax. In a novel brimming with metaphor, this is possibly the most perfect way of describing Dorothy’s elusive, otherworldly spirit. Here is someone capable of penetrating the opaque with her mind’s eye, who can let the light in, and then be that light.