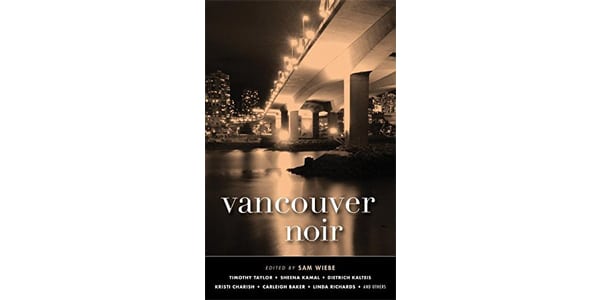 The dark underbelly of Vancouver is exposed in the crime anthology Vancouver Noir, the third Canadian book in the infamous and ongoing international noir series by Akashic Books. Edited by Sam Wiebe, author of the very fine Dave Wakeland crime series (Invisible Dead, Cut You Down), Vancouver Noir is an excellent anthology that would appeal to short-story fans of all types – even those who don’t read the genre on a regular basis.

The collection features a wide variety of writers, some known for crime fiction (Robin Spano, S.G. Wong, Nathan Ripley, R.M. Greenaway), some better known for their work in other genres (Yasuko Thanh, Carleigh Baker, Timothy Taylor, Sheena Kamal). Because of this, the anthology is varied in tone and voice – not always what purists would call noir but with enough human darkness to keep things interesting.

A good number of the stories deal with the types of folks one would expect to find in this type of milieu: drug dealers, streetwalkers, cops, gang members. Wiebe’s own entry, “Wonderful Life,” is an excellent addition to the Wakeland canon; here, the jaded PI deals with his dad’s former police partner, now suffering from dementia and out to punish the wrongdoers of the past. The story is touching and ominous at the same time. “The One Who Walks with a Limp,” by Nick Mamatas, also deals with aging via the story of a faded mob kingpin’s grandson, who tries to remind the modern world how much power his family once had. Thanh’s “Burned” is a harrowing look at the lives of Vancouver sex workers and the things they do to and for their johns. It’s a powerful piece: disturbing but enthralling.

Some of the strongest stories are those that focus on characters lingering at the edges of the criminal world and/or those who live in worlds where crime seems part of a faraway land. Spano’s “The Playgroup” is a chillingly funny piece about moms who live in a well-heeled neighbourhood but get carried away with their own dark desires. Baker’s “The Midden,” an exploration of squatters living in vacated homes slated to be turned into million-dollar condos, is also a sly history lesson about the Salish people who lived on the lands where the vacated homes now stand.

Like the earlier volumes Toronto Noir and Montreal Noir, the new anthology serves as a fantastic introduction for those unfamiliar with the genre and a reminder that Canada, bursting with amazing writers, is one of the strongest countries for crime writing in the world.