by David A. Robertson; Scott B. Henderson and Donovan Yaciuk (ill.)

l to r: David A. Robertson (Credit: Amber Green) and Scott B. Henderson

Late in 2020, prolific Winnipeg-based writer David A. Robertson revisited the world of his stunning young adult Reckoner trilogy – with a twist. The Reckoner Rises series, published as graphic novels, picks up with the wreckage of the original trilogy’s finale. The result is, as one might expect from Robertson, powerful, immersive storytelling, with the additional force of kinetic art by Scott B. Henderson and colouring by Donovan Yaciuk.

Version Control, the second volume of the new graphic series, begins in Winnipeg, where Cole Harper is continuing his investigation into the mysterious Mihko Labs. His cohort of allies has joined him and his childhood confidante Eva in the city – and not a moment too soon.

With Cole close to death following a confrontation with a figure from Wounded Sky First Nation, it falls to Eva to break into Mihko on her own. What she discovers there, in the secret laboratory and the holding cells in the basement, is genuinely terrifying. Things only get worse with the disappearance of Brady, one of their inner circle. 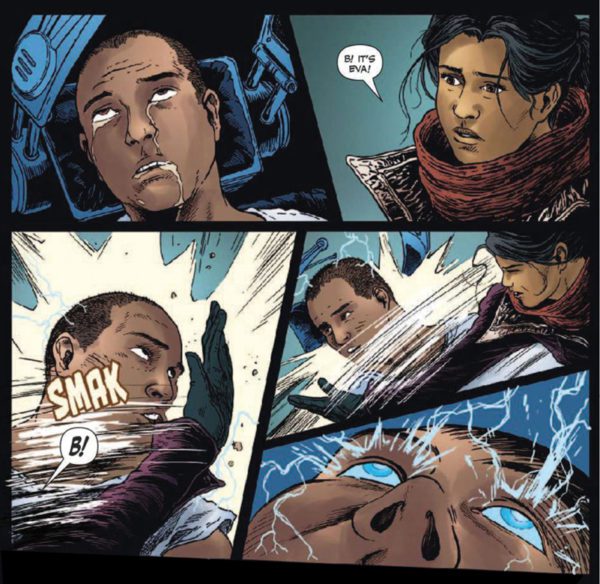 As might be obvious from this brief description, Version Control is far from a stand-alone book. While readers may be able to piece together enough from Breakdown (the first volume of the new series) to enjoy the second, it is best to have read (and reread) the original Reckoner trilogy. Those books establish not only the narrative touchstones but also the depths of the characters and their interrelationships, which shape the novel.

That being said, for the experienced Reckoner reader, the graphic continuation is both a welcome return to a fully rendered world and an expansion of it. In addition to the explosive superhero storyline, the novel also contains a powerful exploration of trauma and loss, the aftershocks of heroics, and the human cost of being superhuman. While all of this could have been explored in a text-only novel (the themes are present in the original trilogy to a lesser degree), the graphic format makes for a visceral reading experience, and the very limitations of the form (the condensed storytelling, the brevity of the volume, and the cliffhanger ending) create significant urgency. Reckoner readers have always wanted more of the series; with this graphic expansion, they have their wish.