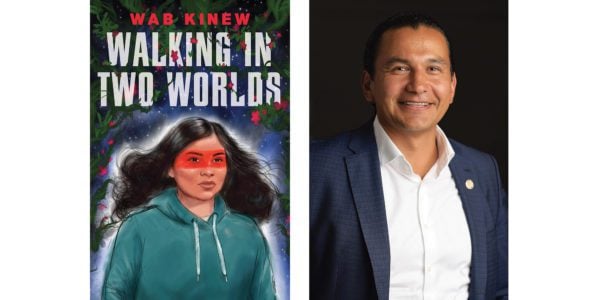 Bugz Holiday lives in two worlds. In the real world, Bugz – the protagonist of writer and politician Wab Kinew’s first fantasy novel for young readers, Walking in Two Worlds – is an Anishinaabe high schooler, a powwow dancer, daughter of the elected chief, and mired by insecurity about her appearance and fitting in.

As Kinew writes, “In many ways, Bugz was just like everybody else … until she went online into the Floraverse.” In the Floraverse (’Verse for short) – a massive, decentralized virtual reality world – Bugz is practically a superhero. Locked in perpetual conflict with Clan:LESS, the brutal male-supremacist horde led by the merciless Alpha, she draws on the power of the reality’s “natural” world and her cultural heritage to fight and survive. It’s an exhilarating moment early on in the novel when she mounts a thunderbird.

Despite its comforting contemporary feel, Walking in Two Worlds is set in a post-multiple-pandemics near future. The Floraverse is as accepted and commonplace as Facebook or TikTok is today. Her status in the ’Verse is no secret – Bugz makes real-world profits from her VR adventures – but her two worlds collide when Feng, a gamer from China, arrives to live with his aunt, the doctor on the Rez. Feng is a member of Clan:LESS, who has suffered personally at the hands of Bugz’s ’Versona.

Kinew develops both the real and virtual storylines with considerable skill. The action scenes in the ’Verse are sharply handled and frequently surprising, while the relationship and family dramas of the real world are graceful, natural, and realistic. Both Bugz and Feng emerge as rounded, complex characters, each rooted in their respective cultures and belief systems (in both worlds). When Feng talks about being taken from his Uyghur family – “I went to a boarding school, got educated, and left the old ways behind.” – the depth of Kinew’s storytelling and the intricacy of the book’s “two worlds” conceit becomes chillingly clear.

As significant and important as its themes are, Walking in Two Worlds falters at a story level in its final stages. The narrative accelerates past the point of credibility, without enough space given for events to become fully significant. When members of Clan:LESS arrive on the Rez, for example, their presence is treated so offhandedly that the destruction they wreak doesn’t fully register: everything happens so quickly that it barely seems to happen at all. This pacing issue doesn’t entirely dismantle the delicate web Kinew builds; Walking in Two Worlds is overall a powerful reading experience, thought-provoking, and emotional by turns. Still, one can’t help but wish the depth and intricacy that characterized the early stages of the novel played through to the end.