Walmart: Diary of an Associate 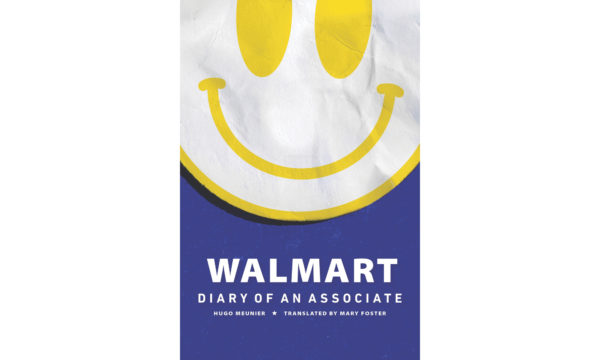 When it comes to critiquing multinational corporate culture, Walmart has provided plenty of low-hanging fruit. Book-length studies could be written about the brand’s radical restructuring of global supply chains, hollowing out of small-town main streets, and cringe-inducing start-of-shift chants. Any exploration of the world’s largest company should ideally provide new insights into the daily life of its employees, customers, and predatory practices.

La Presse journalist Hugo Meunier prides himself on a record of undercover reporting that’s seen him playing a homeless person, an agricultural worker, and a connoisseur of swingers’ clubs. But his capacity to successfully present as a Walmart associate adds very little to the conversation.

Meunier’s diary describes the daily life of a worker bee stocking the shelves, navigating the gauntlet of clueless managers, and addressing annoying customer complaints. But he fails to explore the ways in which mind-numbing work for Walmart is tangibly different from the almost universal retail experience of low pay, inconsistent shifts, inane head office directives, and daily profit quotas. Because he undertakes this assignment with a cynical bias against the corporation he’s investigating, there’s not much room for an inquiring story to develop, and the book is often more about the author than his putative corporate focus.

Indeed, Meunier comes off as a privileged hipster interloper incessantly making fun of a world he can leave behind at a moment’s notice. His approach – piling on one attempt at humour after another, taking verbal potshots at anonymous store customers, and dropping in obscure cultural references unfamiliar to readers outside Quebec – appears to lay the groundwork for a new undercover assignment as a struggling comic.

The best parts of this short book come when Meunier sticks to his regular job: reporting on the history and growth of the company, quoting from those who tried to organize a union at a number of Quebec outlets, or detailing the bizarre corporate training modules millions are forced to stay awake through. But those moments are few and far between, as are the equally rare human stories behind the Walmart myth. We learn more about Meunier’s experience working with a hangover than we do about the briefly mentioned woman whose early morning shift requires her to wake up at 3 a.m. and spend a third of the day’s wages on a taxi to drop her kid at a relative’s house.

Ultimately, this diary feels like a missed opportunity in which the story’s framing device – a reporter’s delight in living a ruse – overtakes the original mission of relating the lives of real people struggling in a world of cheap products and expendable jobs.