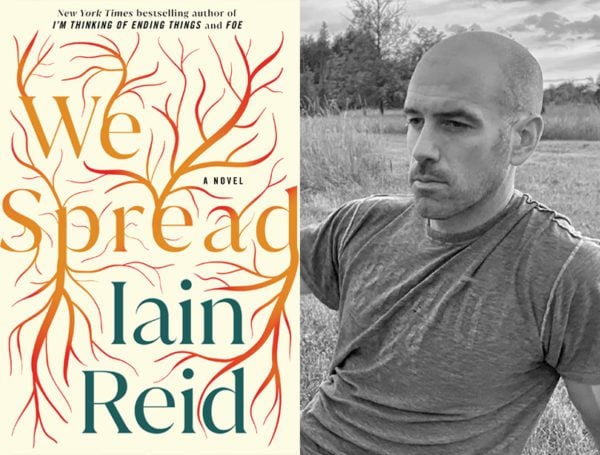 We Spread – the dizzying, stunning fourth novel from Ontario writer Iain Reid – begins in isolation. Octogenarian Penny lives alone in the apartment she once shared with her partner (referred to only as “he”) following his death years before. An artist herself, Penny lived for decades in the shadow of her partner, “a prolific painter of merit and distinction,” and she now lives surrounded by “the listless stacks and heavy piles of a life already lived: vinyl records, empty flowerpots, clothing, dishes, photo albums, magazines about art, drawings, letters from friends, the library of paperback books lining my shelves” – the detritus of their shared life. “At one time,” she muses, “it wasn’t just stuff. It all meant so much to me. All of it. Marrow that has turned to fat.”

The first pages of the novel are a powerful evocation of aging and loss, of what is left behind, and what is, ultimately, truly of value. It’s a heartbreaking portrait in miniature, and one that is genuinely affecting.

The apartment isn’t quite a safe haven. Penny begins hearing voices in the walls, coming from a next-door apartment that is apparently empty. A workman shows up to perform an unplanned task. Time seems to blur. Then, a crisis occurs: standing on a chair to change a lightbulb, Penny falls, injuring her head. As she slips in and out of consciousness, she sees and hears people moving in her apartment. Or does she?

Penny is rescued by her landlord and taken to Six Cedars Residence, an 1843 mansion that now serves as a long-term care facility nestled in the forest. Although she can’t remember it, apparently she and her partner made arrangements for her care before his death.

Six Cedars is a beautiful facility with glorious vistas outside its windows and violin music (played by one of three other residents) filling the air. After some initial resistance, Penny settles in at Six Cedars. She befriends the other residents and the staff, easing into the order and routine of the days. She eats more and better than she has in years. She sleeps through the night, something she had thought was no longer possible. She begins to paint again, and a deeper relationship begins to develop between her and one of the other residents. Conversations take on additional depth, touching on philosophy, art, mathematics, and biology.

It sounds like paradise, but Penny senses that something is off. Why can’t she remember making the arrangements to live there? Why does time seem to blur around her? Why can’t she leave the house? Why is art – her partner’s art in particular – beginning to appear on the walls? Why do her fellow residents seem to change, almost before her eyes? The house itself begins to change shape: “These hallways aren’t what they appear to be. They’re longer. Or shorter, depending on the day. They’re narrow at night, wider in the morning. They change, these hallways, depending on who is walking them and at what point in their life they’re in them.”

We Spread is powerful and puzzling. Like Reid’s previous novels, including I’m Thinking of Ending Things and Foe, it resolutely refuses to offer the reader the security of narrative stability. Not only are we within Penny’s first-person awareness, with its fragility and uncertainty, but the text itself is broken up, each paragraph set off by uncustomary spacing, creating a strange emphasis comparable to line breaks in poetry. Reid’s writing is clear and uncluttered, rich in detail but never fussy. This particularity, however, only adds to the sense of the unreal, hyperreality blurring into a dreamish clarity. Every detail, however concrete, becomes fungible.

Tonally, it feels akin to the “strange stories” of English writer Robert Aickman, notably “The Hospice,” in which the liminal, dreamlike narrative is structured to create a similar experience for the reader. (The emphasis on food in both We Spread and “The Hospice” adds to the similarity, as does the setting, a waypoint – an inherently liminal space.) As Penny discusses at one point, this sort of art is a kind of transfer, “from something I experience, something I feel, into something I’m able to produce. Maybe it makes others feel a similar way. Maybe not.”

Crucially, We Spread isn’t a puzzle to be worked out or a question to be answered; the reader can never quite determine whether they are experiencing the effects of Penny’s advancing age on her cognitive abilities, or if there is something sinister going on in the house, despite seemingly powerful evidence pointing in both directions. Ultimately, the truth is in the experience itself, both for Penny and for the reader. It’s a powerful approach to storytelling, and a courageous one: to commit to ambiguity requires a leap of faith on the part of the reader, and a trust in the writer. In We Spread, Reid demonstrates once again that such trust isn’t misplaced.