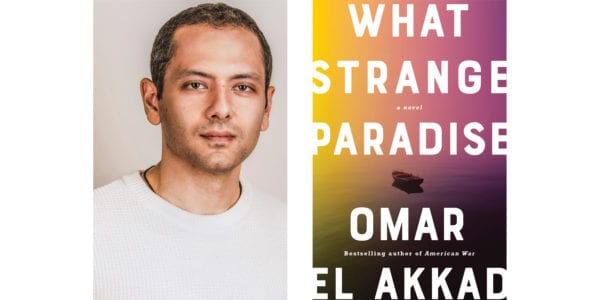 What Strange Paradise, the powerful new novel from Omar El Akkad, begins with a stark and disturbingly familiar image: “The child lies on the shore. All around him the beach is littered with the wreckage of the boat and the wreckage of its passengers. … Facedown, with his arms outstretched, the child appears from a distance as though playing at flight.” It is a scene with real-world resonance: a shipload of refugees washing up on the shores of a small, unnamed Mediterranean island, in the shadows of a luxury hotel, hundreds of people, children among them, paying with their lives for dreams of a better future.

But then something unexpected happens. “A wave brushes gently against the child’s hair. He opens his eyes.”

The moment is electric, for both the characters within the book and for the reader. We are just as surprised as the bystanders and the soldiers when the boy springs to his feet and runs toward the forest adjoining the beach, just as surprised as 15-year-old Vänna when she finds the boy in her yard and spontaneously chooses to shelter him from the men who are pursuing him. Alienated from her own family and aware that “something about the island is changing,” Vänna takes the boy – Amir – under her wing. The novel alternates between the story of how Amir came to be on the doomed boat, and what happened on board, and Vänna’s quest not only to protect the boy but to help him get off the island and connect him with his community on the mainland. What Strange Paradise is a harrowing read – there are scenes aboard the boat, even before the storm that capsizes it, which are almost too intense to bear – but leavened with an unexpected sense of hope.

As was the case with much of his award-winning debut novel, American War, El Akkad keeps his scope narrow, focusing on the intimate human struggles that inform and are formed by larger sociopolitical events. Vänna’s and Amir’s journeys for survival and freedom occur almost at a remove from the larger refugee crisis: while they are from very different worlds, and without a shared language, there is a purity to their actions, rooted in the clear dichotomy of right and wrong. The novel’s other focal character, Colonel Kethros, has a more complex, nuanced view of the world, aware of the issues underpinning the crisis; he is openly skeptical of right-wing politicians seeking to take advantage of the situation, but defers to a sense of order, of rules.

What Strange Paradise is an immediate, visceral reading experience. El Akkad offers no easy answers, save the reminder of our common humanity and the importance of the simplicity of right and wrong. And that is, truly, more than enough.