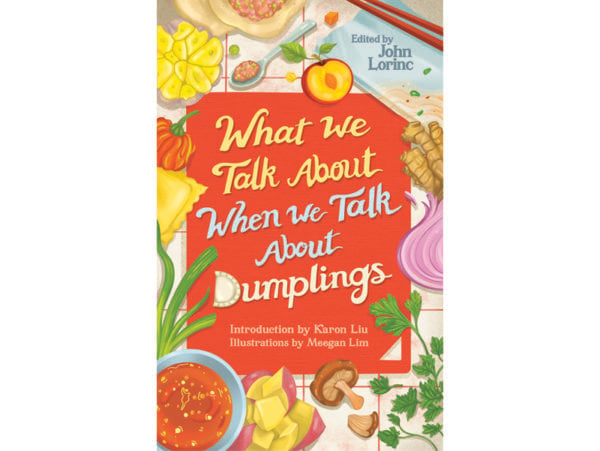 Sometimes when we talk about dumplings, we argue.

What We Talk About When We Talk About Dumplings is a collection of essays from journalists, food historians, and other writers for whom dumplings are a vessel for understanding global and personal histories that include a number of dumpling-related debates. Are Cornish pasties really from Cornwall, or could they be from Devon? Has the matzo ball robbed the krepele of its rightful title as the best Jewish dumpling? And speaking of matzo balls, should they sink or float? Are jam-filled samosas a delightful spin on a classic or a culinary abomination? And the ultimate question, lurking throughout the collection: what counts as a dumpling?

Culinary authenticity is a timeworn topic of discussion in the food world that has only intensified in recent years alongside the popularity of lockdown-inspired cooking content on social media. Michal Stein’s essay “Around the World” zeroes in on this debate through the lens of one of the internet’s favourite firestorms: the viral tweet. Stein writes about gathering friends for a “dumplings from around the world” dinner in honour of a late friend. Her photo of the dumpling selection, shared on Twitter and captioned “We did dumplings around the world,” sparked a heated online debate over which dumplings deserved their spot on the table and which others had been overlooked. Stein’s essay alludes to an essential tension in food discourse: food’s capacity to bring people together can be as powerful as its ability to divide. These debates can be divisive precisely because of how closely food is intertwined with family, memory, and identity. I bristle when Eric Geringas describes the dumplings of my own childhood, Czech knedlíky, as “stale bread boiled in wallpaper paste.”

Food exists at the intersection of the deeply personal and the political. As many of the essays illustrate, dumplings can be understood as edible artifacts of colonial history and global politics. Christina Gonzales describes how the Filipino siopao is inseparable from the colonial and economic history of the Philippines. Julie Van Rosendaal considers the ubiquity of pierogies as evidence of the assimilation of immigrants from post-Soviet Poland to Canada. John Lorinc notes in his contribution that the very presence of Uyghur manti in Washington, D.C., inevitably alludes to the cultural genocide of the Uyghur people in Xinjiang and their migration to the United States.

One of the collection’s strengths is how successfully the authors weave these critical reflections together with personal memory, anecdote, and humour. For Chantal Braganza, the act of cooking Indian potato chops is a method to better understand her grandmother (grandmothers, like dumplings, are everywhere in the collection). “Dumplings, like other foods,” Braganza writes, “can become the screens on which people project meanings, as well as the vehicles for the consumption of particular messages.” Intertwining memory with cultural analysis, authors use dumplings as channels to explore migration, diaspora, and family, situating themselves within unruly cultural histories through their relationships with food.

Kristen Arnett pokes fun at the semantics of dumpling debates by stretching their definition to its satirical extreme. Technically, Arnett points out, if a ravioli is “an outer layer and a filled middle,” everything is a ravioli: a banana, a mattress, a four-door Toyota Camry, the internet. The dumpling has no Platonic form, but there is much joy and flavour to be found in the debate.