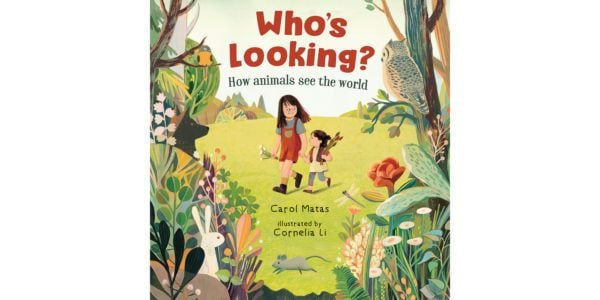 Most children take the way the world looks for granted. Only gradually do kids begin to understand how subjective vision can be (though they probably won’t use the term “subjective” until much later).

Once this happens, it’s only a small jump to wondering how other living creatures see. That’s the concept behind this collaboration between prolific Winnipeg author Carol Matas (with her first-ever picture book) and newcomer Cornelia Li, an illustrator based in Toronto. Told entirely through Li’s images, which appear to be watercolours or watercolour–digital hybrids, the book’s framing narrative centres on a young girl and her little sister exploring the wilderness around their house throughout the seasons. As they do, various species of mammal, insect, and fish look back at them: ants peer up from the ground, an eagle seeks prey from above, and so on. A short blurb that explains the particularities of each creature’s vision accompanies the lush, colourful spreads.

It’s a great concept for a picture book, and Li’s illustrations are gorgeous enough to stand on their own, but there is a bit of a mismatch between intent and execution. To represent how a creature sees, a slice of each illustration is used to depict the animal’s visual field. A mouse’s vision is blurry and devoid of the colour red, for example, and the wolves that pass the girls’ house at night can see so well in the dark that the scene is illuminated. This mostly works.

The problem comes when the visual differences are too subtle. The text also often raises more questions than it answers; whales, for example, have eyes on either side of their heads, and so “may see things very differently indeed!” With fish, things are even murkier: “Don’t forget that seeing underwater is different from seeing things on land.” (The book neglects to tell us how.) Both text and visuals need to be a touch more explicit to really drive the lessons home.

Who’s Looking? doesn’t quite work as a science book, but even so, it is a beautiful, almost meditative reflection on the abundance of the natural world.