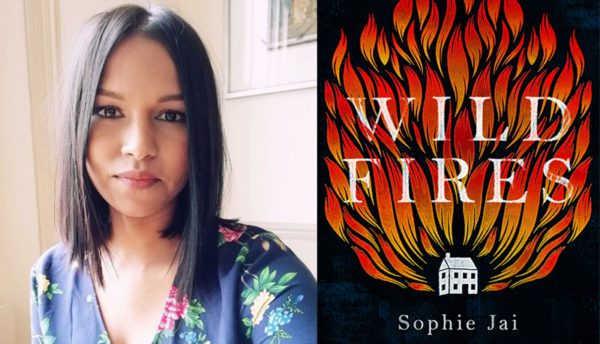 “The story of my family is one of potholes and cracks that I have tried to fill over the years,” narrator Cassandra Mishra tells the reader a few pages into Sophie Jai’s debut novel, Wild Fires. After the unexpected death of her eldest cousin, Patrick “Chevy” Rampersad – who was raised like the beloved son of all four of his mother’s sisters – Cassandra returns to Toronto from England to find that the potholes she has tried to fill have deepened in her absence. Worse, they are slowly devolving into secret-filled chasms that could estrange Cassandra from her two sisters, mirroring the strained relationship between Cassandra’s mother and her own sisters – despite all of the family living together.

Wild Fires begins on the hot and verdant island of Trinidad before moving – with the Rampersad family – to a cold and melancholy three-storey detached house on Florence Street in Toronto. It is a move soon soured by misfortune. The house now is cold partly due to the weather outside, and partly because of the grief stemming from Chevy’s death and the ghosts his death has awakened. The Rampersad family members cycle through an assortment of strategies to cope with their present grief; the shields of silence they have erected around themselves to hold the ghosts at bay will not be easily dismantled. This reticence drains all the oxygen from the household until the smallest hint of conflict – a cryptic word, a plaintive question, a curt answer, a raised voice – is enough to spark the titular emotional wildfire that ravages everything in its path.

Cassandra’s narrative alternates between the present and the past. She reflects on the terse conversations and tense silences among her family before revealing the events in her mother’s life and her own childhood that bear down on the present. Jai’s exquisite, evocative prose transforms the characters and settings from initial hazy outlines into crisp technicolor portraits. Whether it is Cassandra recounting the story of her grandfather’s life through the literal marks the years left on him, or viewing her past as the key to “my home within my mother,” or the description of silence as “faulty caulking,” each page is marked with unique, vibrant imagery that invites the reader to linger over each word lest they miss a beautifully constructed turn of phrase.

This is an excellent debut about grief, estrangement (even when a family is physically together), and reconciliation. Every family has its secrets, and Sophie Jai’s novel is a vivid portrayal of the need to reveal them, before, like wildfires, they start to destroy one’s most important ties.