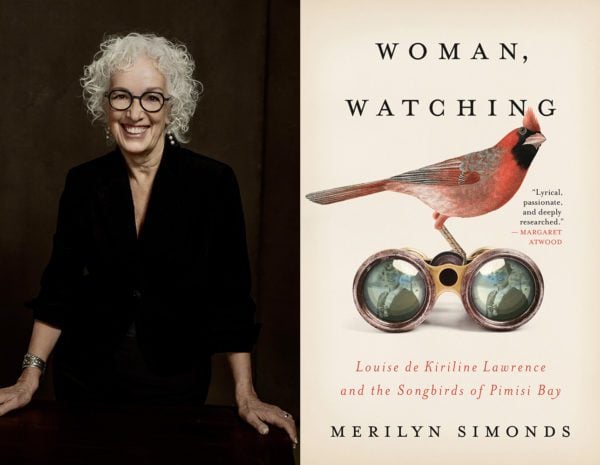 Anyone who has studied Canadian history has likely seen a photograph of Louise de Kiriline Lawrence, even if unknowingly. She’s crouching in the background in one of the most famous images of the infant Dionne quintuplets, a nursing cap veil draped over her shoulders, arms outstretched to frame the babies. The photo was taken in 1934, the year de Kiriline Lawrence turned 38 years old. As Merilyn Simonds’s lustrous new biography Woman, Watching shows, de Kiriline Lawrence already had a lifetime’s worth of adventures by the time she became head nurse to the five most famous little girls in the world. Though the smiling woman in the photograph doesn’t yet know it, she has another five and a half astonishing decades stretching out in front of her.

Simonds traces the life of de Kiriline Lawrence from her early days. The daughter of an aristocratic Swedish family (her godmother was Queen Alexandrine of Denmark), she first learned to love birds under the eye of her naturalist father. It’s an origin that maps neatly onto her later years as a celebrated author and ornithologist, but what comes in between is a life so tumultuous that it would seem improbable in a work of fiction. First, de Kiriline Lawrence’s father died and her family fell into a financial spiral that forced them to sell their home. Then, with the outbreak of the First World War, young Louise decided to buck her family’s wishes and train to become a Red Cross nurse. While working at a prisoner of war camp, she met the dashing young Russian officer who would become her first husband. De Kiriline Lawrence followed him when he returned home to fight against the Bolshevik Red Army; in the end, he would lose his life, and she would barely escape with hers. Never daunted, the young nurse decided to make a fresh start in a fantastical land she’d once heard one of her patients describe: Saskatchewan, Canada (though she would never make it farther west than North Bay). And those events happen in the first 37 pages of the 368 that make up her biography.

After her stint with the quintuplets, de Kiriline Lawrence moved into a cabin deep in the northern woods. There, she and her handyman – who would eventually become her second husband – tried to make a go of it, first with chickens, later by raising mink (they’d read the same Maclean’s article about the enterprise as Alice Munro’s family had). Within four months of her second wedding, which took place the day after Canada declared war on Germany in 1939, de Kiriline Lawrence once again found herself with a soldier husband, except this time she couldn’t follow him. Stuck at home, de Kiriline Lawrence began what would become her life’s work: studying and writing about birds. A natural autodidact, she spent the rest of her life building an expertise in ornithology, publishing many works along the way and becoming the first Canadian female elective member of the American Ornithologists’ Union. Her research contributed immeasurably to the understanding of several North American bird species, and she was one of the first to note the permanent decline of songbirds due to pesticide use.

Simonds – an author of both fiction and nonfiction, including The Convict Lover – is a master of her craft, and that’s clearly reflected in Woman, Watching. Her prose is rich and sprawling, spinning an in-depth narrative out of de Kiriline Lawrence’s life. Stepping into this story is like entering its subject’s beloved forest: there is always another layer, another secret path, another living, breathing thing left to discover. Woman, Watching is a book for long summer twilights or cold winter nights – preferably spent at a cottage or by an old stone fireplace. It’s the kind of book you’ll dive into only to shake your head a few chapters later and wonder where the day has gone. As with the woods, a reader can get lost in there if they’re not careful.