You Still Look the Same 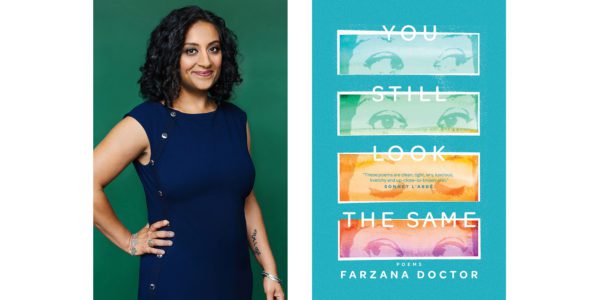 You Still Look the Same is the first book of poetry by novelist Farzana Doctor, whose fiction explores queerness and sexuality in the small and insular Dawoodi Bohra sect of Islam. Doctor’s 2020 novel, Seven, broke a taboo by speaking about khatna (female genital mutilation) in the same community. The pieces in You Still Look the Same also break those taboos, most notably in the “Khatna Suite.” Other themes explored include midlife sexuality, dating, and breakups, told with an often humorous and witty voice.

In “Solitudes,” Doctor narrates the connections formed between neighbours through shared walls and floors. In the poem’s second vignette, the narrator hears her upstairs neighbour’s grief after a breakup, and reaches out:

Her reply tumbles down:

Sorry if I disturbed you.

I long to write:

I know this grief.

Doctor’s vignettes echo moments of distance and intimacy, the language filled with emotion and longing. In “Judging Other People’s Breakups,” she writes, “You watered her dry plants, / and just for a moment, / petals flushed, / dusty leaves green again.” The words evoke the connection between two individuals in the aftermath of their separate breakups.

Halfway through the collection, Doctor introduces the series of poems called the “Khatna Suite.” These directly address the harm done to women and the trauma that follows the rite of khatna in the Dawoodi Bohra community. In “Zainab” Doctor writes:

But there are nights alone in bed

when all I feel is

your stamp of shame

Navigating this trauma is an isolating process because of the taboos against speaking in opposition to community leaders and religious rites. By writing and publishing these poems, Doctor refuses to maintain the silence that forces women to carry their shame alone.

The epithets spewed at activists objecting to the practice of khatna comprise “Twitter Trolls, aka, Bohra Women for ‘Religious Freedom.’” The shape of this poem resembles a rida, the religious attire worn by Dawoodi Bohra women, and each line carries the biting language of internet aggressors. As with the novel Seven, these poems recognize and acknowledge the shame and betrayal that women carry. In “Grandmothers,” Doctor speaks to the enduring nature of the trauma – “her body will remember” – and the resulting estrangement between generations of women.

Appearing in the final section, the title poem returns to the theme of shared pasts. As two friends reconnect after decades of separation to “parse out memories / about olive- and brown-skinned girls,” Doctor elucidates paradox by counterpointing the lines, “This is your memory not mine” and “This is my memory not yours.” Relationships are built through moments of combined or contradictory recollections, whether between childhood friends or neighbours who share a connecting wall.

You Still Look the Same is a powerful and necessary collection that breaks silences and speaks to the griefs and joys we all experience. Life is a constant process of separation; nevertheless, in Doctor’s poems moments of love and laughter always resurface.