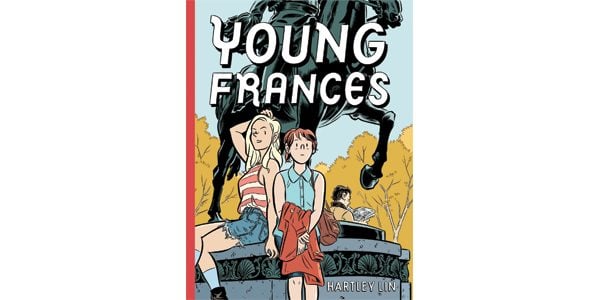 For many, this new graphic novel from Hartley Lin will signal the debut of a talented, thoughtful cartoonist. But connoisseurs of Canadian literary comics have already gotten to know Lin’s work over the past decade, through his much acclaimed, pseudonymous serial anthology Pope Hats. In this welcome hardcover volume, boutique U.S. comics publisher AdHouse brings together the previously uncollected stories of his character Frances Scarland, in an edition that serves as either a worthy introduction to Lin’s work or an essential addition to the libraries of Lin’s many fans.

Young Frances follows the daily life of a 20-something law clerk navigating a period of personal insecurities and surprising career advancement. Assigned to assist Marcel Castonguay, the mysterious Head of Bankruptcies, Frances is thrown into the centre of her firm’s office politics and finds herself unable to avoid the combative, exhausting, and sometimes bizarre demands of her job.

Quarter-life crisis is too dramatic a characterization of Frances’s story. But she can’t sleep, and she has arrived at a point in life where she craves “that thing that everyone else seems to have … that lets them dive into the world with grace.” Young Frances takes a subtle, true look at the strangeness of adulthood, as Lin’s protagonist discovers that her day-to-day might eventually become her whole life.

Lin’s visual style is accessible, his characters just cartoony enough to allow a very broad expressive range. Young Frances is not exactly a funny book, but Lin knows how to balance stillness and introspection with levity, and his character designs – of Castonguay in particular – and sense of visual rhythm invite the occasional chuckle. The book is notable, too, for its loving illustrations of Toronto streetscapes, which will not only delight those familiar with the city, but contribute to Lin’s tone, always anchoring his big, existential ideas to particularities: this sidewalk, this subway line, this house.

Though focused on Frances, in some ways the book reads like an ensemble piece, and Lin’s supporting cast is richly developed. From party-girl roommate Vickie to stuck-in-a-rut Nina to over-caffeinated, overtired lawyer Chris Seagull, the characters’ anxieties, dreams, and conditions propel Frances’s story forward with realism and candour.

With this book, Lin demonstrates a mastery of lithe narrative on a human scale. Young Frances is an important contribution to contemporary fiction – graphic or otherwise – that is both artful and eminently readable.