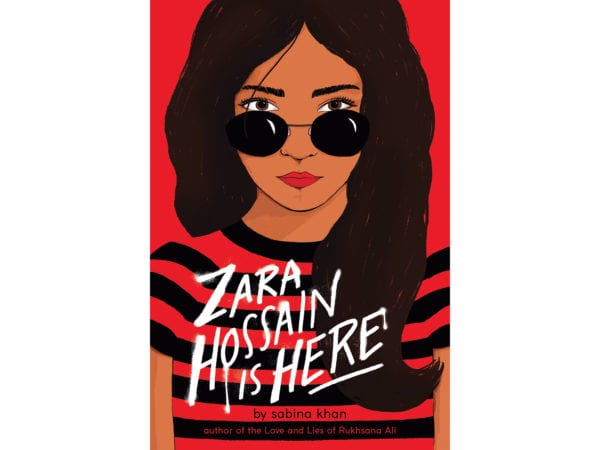 Basking in the glow of a Biden-Harris White House, America may appear to have a newly progressive sheen, but it’s not bright enough to blind observers to the country’s ugly prejudices. Sabina Khan, author of The Love and Lies of Rukhsana Ali, dramatizes these tensions in her second YA novel.

Set in Corpus Christi, Texas, the story follows 17-year-old Zara Hossain, who feels adrift between two cultures. Born in Pakistan, she was brought to the U.S. by her parents when she was a baby. As a Muslim at a Catholic high school, she’s in a religious minority and is confronted everywhere by racism: the systemic, the micro, and the unmistakable.

In one instance, her family’s garage door is spray-painted with blood-red graffiti that reads, “Go home terrorists.” That incident sparks a chain of events that threatens her father’s immigration status, forcing Zara to reflect on how her identities inform the person she wants to be. The cruel bigotry that Zara experiences (such as being told her people want to bring Sharia law to the U.S.) is disturbingly realistic, reflecting the prevalence of white-supremacist beliefs and misinformation.

Khan writes viscerally about how it feels to be the target of such taunts: “My whole life I’ve been surrounded by people who view anyone with brown skin through such a distorted lens that they can’t possibly relate. I regret so many missed opportunities to help them see that they’re being closed-minded, but always in the back of my mind there’s been a voice telling me to let it go.”

While this type of ripped-from-the-writer’s-journal inner monologue rings true, it comes at the expense of creating a believable teen voice. Believability is also strained when it comes to Zara’s sense of humour, which can be broad in a way that feels disconnected from a generation raised on absurdist memes. “Did you download a word-a-day app?” she snaps back at a racist bully – not exactly the wittiest retort.

Though Zara experiences hardships as a person of colour, her family loves and accepts her queer sexuality. She begins spending time with Chloe, whose Catholic family uses religion to fuel their homophobia. Chloe’s arc includes a dawning recognition of her own white privilege, a plot point in step with our larger cultural conversation, and one that gets a fresh take when viewed through the lens of YA.

Through Zara, who personifies the experience of a racialized, queer, and religious minority, Khan centres a character who has often been consigned to the margins in fiction. But Zara Hossain Is Here sometimes reads as if it is being written at its audience rather than for them. There are moments of moralizing that presume the reader is unable to draw their own conclusions, a risky bet when speaking to a generation at the forefront of driving social change.