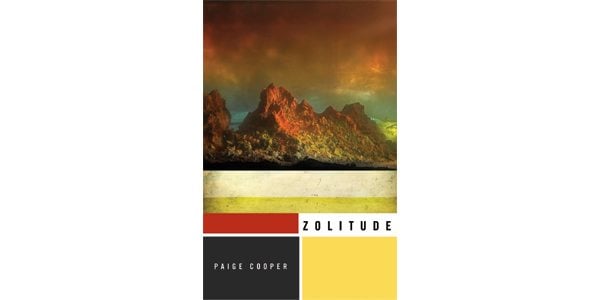 Given how often the stories in Paige Cooper’s debut feature solitary characters flailing for connection, readers might be forgiven for assuming the title is just some kind of clever millennial distortion of the English word for being alone. It isn’t until the narrator of the title story, a researcher living on a houseboat in Riga, mentions that her parents live in a Soviet-era housing estate called Zolitude that we realize the title refers to a real-life place – the site of a tragic 2013 accident in which a collapsed shopping-mall roof killed 40 people. It’s precisely this kind of play – with meaning, expectation, and, fundamentally, language – that makes this collection such an intoxicating read.

Cooper’s main theme is love, but rarely have love stories seemed less clichéd and predictable. None of the book’s 14 pieces is quite like any of the others, and their settings range from eerie but recognizable variations on the present (Latvia; small-town America; Russia; southeast Asia) to dreamscapes of the future. Indeed, Zolitude engages in a degree of world-building unusual in Canadian literary fiction, with Cooper jumping from a future West Coast devastated by a massive earthquake to a vanguard colony dedicated to terraforming Mars to the jungle construction site of the world’s first fusion reactor. Even settings that at first feel familiar – the hunting lodge in “The Roar” for example, or the tropical resort in “Spiderhole” – turn out to be populated by shapeshifting creatures and prehistoric reptiles.

At times, this penchant for fantasy creates challenges. Cooper tends to drop her readers into the narrative cold, and stories like “Record of Working” and “Thanatos” don’t so much unfold as emerge from descriptions of characters and events that at first seem bewildering. This at times maddeningly oblique approach works because Cooper has a masterful sense for pacing and tension, and a remarkable facility for creating sentences so descriptively rich and syntactically clever one cannot help feeling impelled to read on.

Still, the collection’s greatest strength is its emotional maturity. Despite their fantastical elements, the beating heart of Cooper’s work is the characters themselves: their bewilderment and longing, their struggles with jealousy and compassion and love. In the most powerful pieces, “Record of Working,” “Zolitude,” and “Vazova on Love,” Cooper manages a virtuosic synthesis of imaginative brio and humanistic insight. Particularly in that last story, which depicts a burgeoning affair between a spy and her target during a frigid winter in a northern Russian port city, tenderness and violence and doom are so densely layered as to deliver the affective impact of a novel.

It is common to hear people describe books they love by saying they couldn’t put them down. Zolitude has the opposite effect: these stories are so well made, so viscerally moving, I often found the need to take a break between them to recover. Cooper’s work is entertaining, but it also demands our full attention. – André Forget