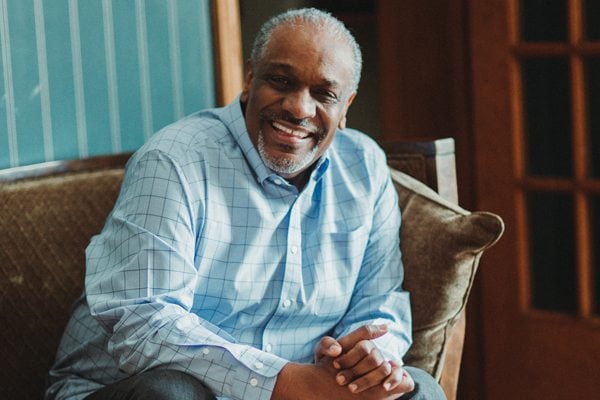 “I always wanted to write about slavery,” says Christopher Paul Curtis. “But I like writing in the first person and when I thought about what a slave has been through, I couldn’t imagine it. What it takes to think of yourself as subhuman, as an animal. And how if you wanted your kids to survive you have to teach them that they are subhuman, too.”

It was Buxton, Ontario, that gave Curtis a way in to the topic. Growing up in Flint, Michigan, in the 1950s and ’60s, Curtis heard about a small town across the border where runaway and freed slaves had settled – and prospered – in the mid-1800s, before the Civil War. Then, while driving on the 401 decades later, he saw the sign for the Buxton Museum and decided to stop. “I just wanted to get a feel for the land,” he says. “It was something magical to think that people who had been enslaved were free for the first time.”

When Curtis made that first visit to Buxton in 2003, he was living in Windsor, Ontario, and was already the bestselling author of – among others – the Coretta Scott King Book Award winner The Watsons Go to Birmingham – 1963 and the Newbery Medal winner Bud, Not Buddy. He immersed himself in Buxton’s history, poring over artifacts and newspaper clippings. Curtis’s fascination resulted in the middle-grade novels Elijah of Buxton (2007) and The Madman of Piney Woods (2014), fictional accounts of those first free people – their harrowing journeys, difficult transitions, and success stories.

“As we study history here in the U.S., we learn about the Underground Railroad,” says Anamika Bhatnagar, Curtis’s editor and associate publisher at Scholastic in New York. “We learn about how people travelled northward and the goal was always to make it to Canada. But what’s so successful about these books is they tell us about what happened when you made it to the other side – what happened at the end of the railroad. That’s a first in children’s literature.”

In January, Scholastic published the third book in what it is calling Curtis’s Buxton Chronicles, The Journey of Little Charlie. Fans of the earlier novels may be surprised and initially disappointed that Buxton plays a very small role in the new volume and that the main character is a poor 12-year-old Caucasian boy from Possum Moan, South Carolina. When we first meet Charlie in 1858, he’s a product of his environment, who has never had a reason to question the ways of the South. Things change once he makes his first journey away from home, accompanying a local plantation overseer north to retrieve a family of runaway slaves. Witnessing the ignorance and vileness of his travelling companion – a self proclaimed “slave catcher” – and faced with the task of shackling the former slaves in the streets of Detroit, Charlie’s conscience is awakened and he becomes a character today’s readers can get behind.

In the book’s climax, Charlie makes a choice between siding with the people of Buxton or fighting against them. It’s a scene Shannon Prince, curator of the Buxton Museum, is looking forward to reading. She estimates that at least 60 per cent of the people who visit the museum do so because of Curtis’s Elijah of Buxton. That novel describes the townspeople’s real-life ritual of ringing a freedom bell whenever a new runaway or freed slave arrived. Readers in the U.S. now make their own pilgrimages to ring a replica bell and visit the community’s historic church and school. “Recently people have come from Florida and Texas,” says Prince. “Last American Thanksgiving, a family from Chicago made the drive. They listened to the audiobook of Elijah on the way. Then the two daughters bought the hard copy from our gift shop to read it again on the way home.”

When Curtis is not in a museum doing research, you can find him writing at his neighbourhood Tim Hortons. Before he was published he wrote at the Windsor Public Library. “But I got to know too many people and it was a gab fest,” says the author. “Then I tried the University of Windsor, but when the students found out I was a writer they asked for help with their papers.” Next Curtis worked at home, but his three children, all under age seven, made that too difficult.“I like to write early, so some days I get up at three a.m. and get to Tim Hortons by four – it’s the only place open.”

Curtis wasn’t published until he was 42 (he’s now 63) and his journey to becoming a beloved children’s author is its own novel-worthy story. “My parents were avid readers,” he says. “At the beginning of the week my father would buy my mother seven mystery novels and two packs of cigarettes. Any image I have of her she has a cigarette in one hand and a book in the other.” In second grade Curtis’s father brought home the World Book Childcraft Encyclopedia set with a warning: “These cost $300 and if I see a pencil or crayon near them heads will roll.” Those reference books sparked an interest in reading for Curtis, who was a good student. But growing up in Flint meant your future was predetermined. Once out of high school, Curtis worked at General Motors, hanging doors on Buick LeSabres as they came down the line. A few years in, he began using his breaks to write. “I tried fiction, but I knew it was bad,” he says. “So I set it aside and started with journals.” When he quit the factory he had a series of jobs – garbage collector, maintenance man, census taker, campaign worker – during which time he stopped writing altogether.

In 1994, Curtis, now living in Windsor, took a leave of absence from his job unloading paper pallets at a payroll services company. His plan was to spend his days at the library trying his hand at fiction once again. “Eventually I hit on ‘The Watsons Go to Florida,’” he says. “It started out as a family taking a trip to Florida to see their grandmother. The only trouble was that once they got to Florida nothing happened.” When Curtis came across Detroit poet Dudley Randall’s 1963 poem “Ballad of Birmingham” – a reaction to the bombing at the 16th Street Baptist Church in Birmingham, Alabama – the author reworked the story into The Watsons Go to Birmingham and entered the manuscript into contests at Little, Brown and Random House. “I got a letter back from a Little, Brown editor,” says Curtis. “She wrote, ‘The story is funny, touching, and all the characters seem real.’ And then she got poetic, saying, ‘Alas when the last page is turned, I don’t think this story will resonate with readers.’ That was crushing.” Then came the call from Wendy Lamb at Random House, who said the book skewed too young for the contest, but they’d publish it anyway.

The Watsons (1995) sold three million copies and was originally optioned by Whoopi Goldberg. (It was made into a film by Tanya Lewis Lee in 2013.) Curtis’s Depression-era book Bud, Not Buddy (1999) also sold three million copies and last year was turned into a critically acclaimed theatre production at the Kennedy Center. Both of these books are set in Flint; Curtis has kept a close connection to his hometown.

This February will be his ninth year judging the city’s Writing Adventure program, run by the University of Michigan-Flint. Approximately 400 Grade 4 students attend a one-day event, where Curtis encourages them to read and write, and shares anecdotes about his own upbringing. The students are then asked to produce a personal essay, the best of which are sent to Curtis to judge. In May the university holds a gala dinner for the finalists and their families, where Curtis names his overall winners. “His commitment and message of hope mean so much to these children,” says Sapna Thwaite, acting coordinator of the program, noting that many of these kids will suffer long-term effects of Flint’s lead-contaminated water crisis. “Having a well-known author speak to their lives is very motivating.”

While Curtis will continue to act as mentor to the young people of Flint, his life is rooted in Canada, where he’s chosen to raise his kids. “I was having flashbacks when I was writing [about runaway slaves in] The Journey of Little Charlie,” says Curtis, “and Donald Trump was doing his stuff about immigrants. People were coming into Canada again, across frozen fields with crying babies. It was the same thing all over. I don’t think Canadians take enough pride in what they’ve done.” All the more reason for this Tim Hortons–fuelled dual citizen to keep telling stories that cross borders – and illuminate history.