★The Journey of Little Charlie 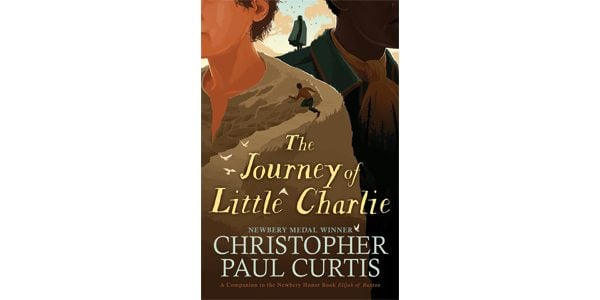 Christopher Paul Curtis’s latest book is a companion to both his Newbery Honor–winner Elijah of Buxton and its follow-up, The Madman of Piney Woods. Both of these earlier books take place in Buxton, the real-life southern Ontario town that was home to a prosperous free slave community in the mid-1800s. Buxton plays only a small role in this new adventure set in 1858. In The Journey of Little Charlie, the main characters take a road trip from Possum Moan, South Carolina, to Detroit, Michigan, with a detour into Ontario. The narrator is Charlie Bobo, the 12-year-old son of a white sharecropper, whose family can’t catch a break: “In life, there was good luck followed by no luck, followed by bad luck, followed by tragical luck, followed by the luck of the Bobos.”

When Charlie’s father dies in a freak accident, the local plantation overseer, Cap’n Buck, comes to collect a debt from the family. Charlie knows the Cap’n by reputation: he’s quick to use his pistol or whip on just about anyone and has an affinity for unusually cruel punishments, including cat-hauling children (which involves running an agitated cat’s claws along the victim’s back). The Cap’n insists Charlie accompany him to Detroit to retrieve a family of slaves who ran away 10 years ago. Thanks to the Slave Act of 1850, Southerners could travel north and claim former slaves, shackle them, and take them back “home.”

Curtis has hunkered down in pretty disturbing territory this time, viewing slavery from the oppressor’s perspective. But even when it is shining a light on an era and a character we’d rather forget, the story never gets cumbersome or preachy. Curtis’s priorities are storytelling and action; he keeps things moving at a fast pace and can have you laughing soon after delivering a punch in the gut.

Travelling by horse, Charlie has plenty of time to contemplate the man he’s saddled with. Besides smelling worse “than something warm that dropped out of the south end of a sick northbound goat,” the Cap’n is ignorant, mean, and boastful. But Charlie listens carefully to all he has to say, heeding advice his father once gave him: “You can learn from anybody. Even dimwits can teach you if you listen careful and pick out the kernels of corn from the horse crap they’s dishing out.” The education Charlie gets from the Cap’n and other travellers they meet on the road does end up serving him well when it comes time to step up and be the hero.

The Cap’n and Charlie make it to Detroit and find two of the three family members, but the third is in Canada, where the Slave Act does not apply. The Cap’n is ready to cross the border and take what’s his, despite warnings from the Detroit sheriff: “You gonna be fishing in a complete different pond once you ‘crost that river.’” While the Cap’n will not be deterred, he does take one piece of the sheriff’s advice and tidies himself up before he goes, getting the “South Carol-liney” off so he and Charlie can pass as “Yankee Doodle dandies.”

The Cap’n’s efforts to get clean and shaven, along with other light-hearted scenes, inject the humour that Curtis is known for, and it’s more welcome than ever in this particular, often harrowing book. It’s hard to imagine how teachers and parents will explain the derogatory names the Cap’n uses, not to mention his sadistic tendencies. But Charlie, who’s both innocent and thoughtful, balances out the tone. And his moral awakening comes just in time to join with the people of Buxton and give the Cap’n a taste of Canadian justice – making for a thrilling end to a completely unforgettable journey.