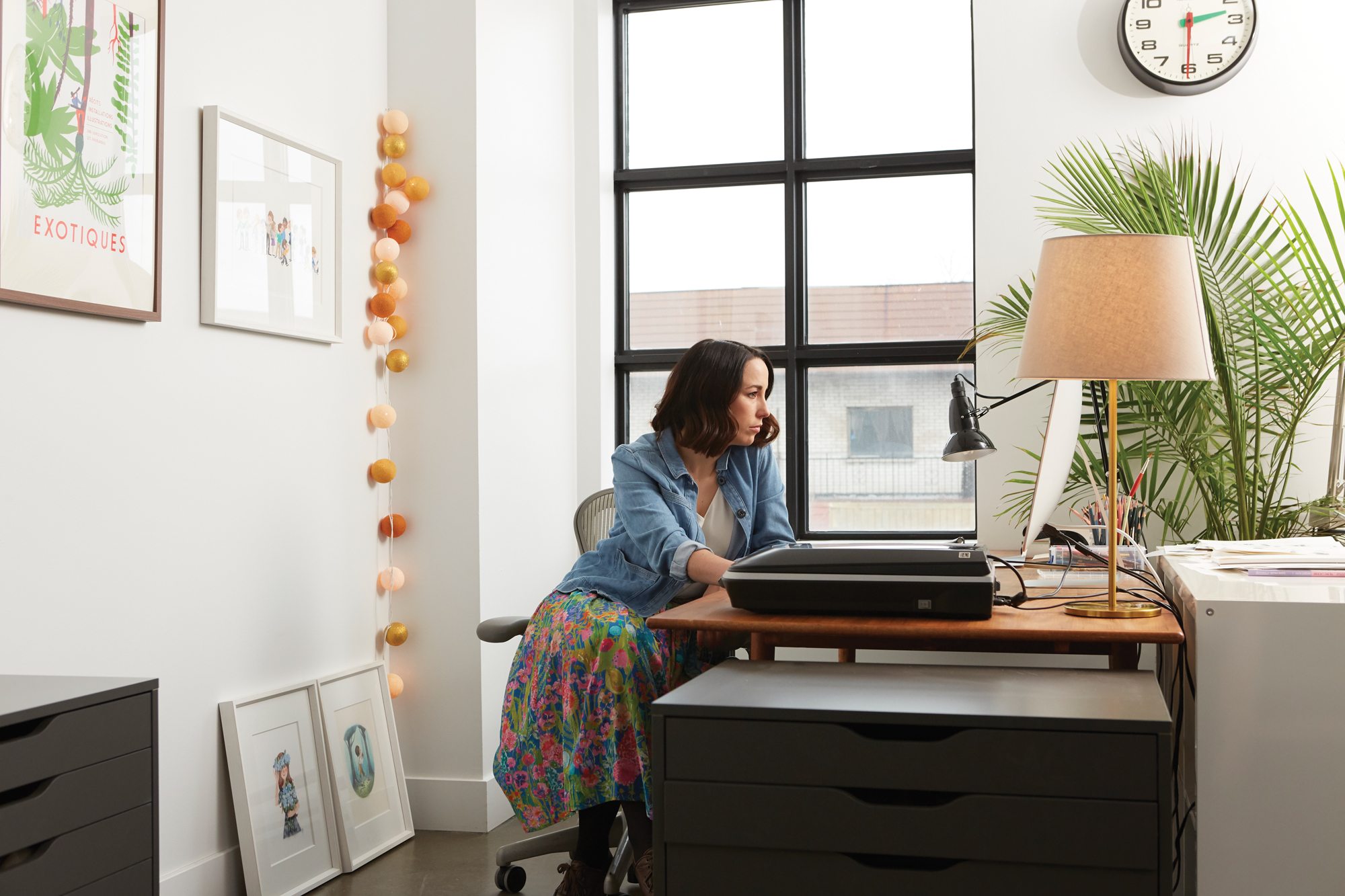 Godbout in her studio: “I know people will discover my work through these characters. It was a lot of pressure.” (Richmond Lam)

Geneviève Godbout still has the book she was obsessed with as a child: the French edition of Richard Scarry’s Best Word Book Ever. But she didn’t exactly read it. “I wasn’t a big reader because I was drawing all the time,” Godbout says. “I would look at the book and draw.”

Raised in Saint-Raphaël, a small town near Quebec City, she had only four or five children’s books growing up. Although her mother was a reader, Godbout lived with her father, who wasn’t. “But he always recounted fairy tales before bed,” she says. “He would make funny voices and I loved it.”

What her home lacked in printed matter it more than made up for in movies: she had VHS copies of all the Disney films. So it’s perhaps no surprise that Godbout set on a career in the visual arts. At 16, she moved to Montreal to attend the animation program at Cégep du Vieux Montréal and at 19 moved to Paris to continue her studies at the prestigious Gobelins animation school. She joined Disney Consumer Products in London and was put in charge of creating new licensing images of Winnie the Pooh and The Aristocats for Europe.

After a few years, Godbout felt like she needed a change. She took on a few side projects, including some picture-book illustration gigs, and secured representation with Emily van Beek of Folio Jr. in New York. In 2013, Godbout returned to Montreal to illustrate full time. “With books you have to choose what you want to tell in the [artwork] because you have a limited number of pages,” she says, when asked how animation and print storytelling differ. “But you can also illustrate something different than the text. Plus, there’s something more intimate about books; the experience is different for each person.”

That intimacy was top of mind for Godbout when she was recently asked to illustrate not one but two of kidlit’s most iconic characters: Anne of Green Gables and Mary Poppins. The two books – Goodnight, Anne by Kallie George (Tundra Books) and a picture book adaptation of P.L. Travers’s Mary Poppins (Houghton Mifflin Harcourt Books for Young Readers) – are out this fall. “I just couldn’t believe my luck. They are two of my favourite characters,” she says, but admits she was really nervous to take them on. “I know people will discover my work through these characters because they are so well known. It was a lot of pressure.”

Because Godbout felt she couldn’t stray too far from what people expect, her interpretations of the characters rely on what she does best: adding a sense of nostalgia through charmingly expressive dot-eyed characters and dreamy backgrounds rendered in soft coloured pencil.

That same warmth is apparent throughout her oeuvre – from Nadine Robert’s Joseph Fipps to Lori Haskins Houran’s Johnny Appleseed. “I think of it as retro Disney/Little Golden Books meets ModCloth,” says Tara Walker, vice-president and publisher of Penguin Random House Canada Young Readers. “There is a lovely vintage sensibility to Geneviève’s work and a fashionable flair. I think it’s a classic sweetness that invokes memories of childhood but with a modern twist that draws people to her work.”

Not surprisingly, the illustrator’s first introduction to both Anne Shirley and Mary Poppins came by way of a screen. Godbout, 33, has vivid memories of watching the CBC’s 1985 Anne of Green Gables miniseries as a child. She also owns the 1979 Japanese anime TV series, which she rewatched before starting work on Goodnight, Anne, along with reading L.M. Montgomery’s novel for the first time.

Kallie George believes Godbout pulled off the red-headed heroine beautifully. “Words and images need to dance together on the page, each bringing something unique to the story to make it a coherent whole,” George says. “Geneviève’s images define and develop the characters, establish the setting and mood of the story, explain the plot, and are so, so attractive you can’t help but fall in love with them.”

As for Mary Poppins, Godbout has seen the Disney movie numerous times and admits that while she tries to ignore any previous visual representations of a character so as not to be influenced by others’ interpretations, tuning out the film was almost impossible. “I was literally terrified,” she says. “It’s hard to see things differently. But I had already done four covers of the original books, and the publisher wanted the style to not be too far from what I did. I worked on the colour palette, looked at lots of pictures of London, and I tried to do something that is only me.”

Godbout’s creative process begins in a local café, where she sketches story ideas. And inspiration strikes as she innocently overhears the conversations happening around her. “The people I meet in my day to day life could be characters in a book,” she says.

Once the story is set, Godbout looks at colour, pattern, outfit ideas. She’ll work on thumbnails to determine the spreads, then on the drawings. She sketches in Photoshop, and when everything is approved, she turns to coloured pencil and/or pastel.

Her studio is a light-filled space she shares with fellow illustrators Isabelle Arsenault (Colette’s Lost Pet) and Michel Rabagliati (Paul series) at the top of Quebec publisher La Pastèque’s new building in Montreal’s Mile End neighbourhood. “It’s inspiring to work next to illustrators I admire,” says Godbout. “When I’m not sure about something, I can ask for their opinions; when it’s not a good day, we might go get a coffee and share ideas.”

Currently she’s working on a second Anne of Green Gables picture book as well as a French graphic novel by Perrine Leblanc about an Irish family who immigrates to Montreal during the Great Famine. And Godbout has another book out this fall: the French-language Malou, in which she acts as both author and illustrator. Malou tells the story of a little kangaroo that doesn’t want to jump anymore. “I’ve been through depression and I feel like the hardest part is when you stop loving what you love best,” says Godbout. “I wanted to tell a story about what it’s like to not want to do something anymore and who can help you when you feel low.”

This idea of friends helping friends when they are down can also be seen in The Pink Umbrella, a well-received, Godbout-illustrated picture book released earlier this year about a vivacious café owner who welcomes everyone with a big smile but can’t get out of bed on grey and rainy days. French author Amélie Callot wrote the story for and about Godbout after the two met through a mutual friend. “She got a good sense of who I am through my illustrations,” says Godbout. “It was just a perfect story.”

According to Walker, who acquired The Pink Umbrella for English publication, “Geneviève is truly a reflection of her art – she is lovely and bubbly, one of the sweetest and most caring people I know. She’s a true perfectionist who pushes herself with every piece of art and with every book.”

Richard Scarry once said, “Artists paint pictures. The best artists paint pictures for children’s books.” While children’s books may have been something Godbout discovered later in life, they are now her passion, especially the illustrations of Christian Robinson (Gaston), E.H. Shepard (Winnie-the-Pooh), Tomi Ungerer (The Three Robbers), and of course Scarry. And even though it was not her experience, she now wishes that “every child could grow up with lots of books on their bookshelves.” And, yes, some Disney movies, too.